For this mission your objectives are to capture the Radar Center and then destroy the Sub production facilities. The bay to the Sub Pens is protected by Tesla Coils so you’ll probably find it easier to take out the Soviet base, including the Tesla Coils, first before destroying the Sub Pens.

When you arrive on the map clear the area and land the Transport to let the Command Center Truck and other units disembark. Quickly build your Command Center, Power Plant and Barracks. Start training Rocket Soldiers while you’re building the Ore Refinery. Spread the Rocket Soldiers around your base to give them the best chance of shooting down enemy planes. Build a few Pillboxes to the south of your base to protect from ground units. Now you should be fairly well defended.

Build a War Factory and send 7 or 8 Medium Tanks to the south to destroy the small Soviet Outpost with the Radar Center. Make sure you keep the Radar Center standing as you’ll need an Engineer to capture it. 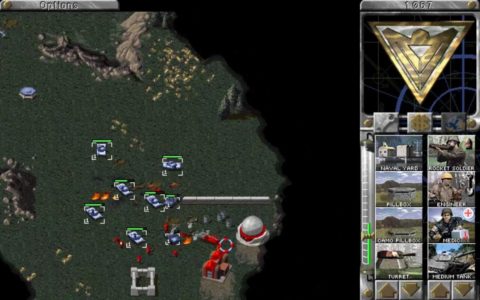 Once it’s captured you can sell it to recoup some of your expenses. You can try and defend it but the Soviet units will continue to target it until it’s destroyed.

Continue building Tanks until you have a force of around 15 to 20. You’ll also want to build either Gunships or Destroyers to clear the oceans of Soviet Subs. Send your Tanks rolling through the Soviet base to the east, making sure to destroy the Power Stations so you can disable the Tesla Coils. Bring your navy all the way around to the south-east to destroy the Sub Pens and complete the mission.

Next: Protect the Chronosphere