In the Cemetery of Ash your character will rise up from the dust. Welcome to Dark Souls 3! The glowing red marks on the ground will give you some control tips for playing the game. 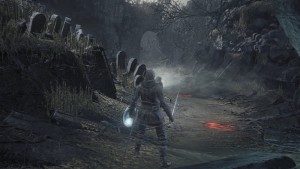 Just up ahead is your first enemy. A Hollow. This area is fairly easy but Dark Souls 3 will get fairly difficult quickly. Continue down the path to find a Fading Soul of a Deserted Corpse.

Up ahead is another Hollow kneeling down on the ground. He will attack with his broken sword when you get close. Take him out with a strike or two and loot the corpse near the broken fountain. You’ll find the Ashen Estus Flask. You can drink from it to restore your FP. The normal Estus Flasks will restore your HP.

To the right up the few steps is another Hollow looking the other way. Take him out and then head up the steps on the left side of the fountain. A Hollow will attack, this time leaving behind a Fading Soul when you kill him.

Walk down the next set of stairs to face a Hollow and then down the stairs a Hollow with a crossbow. Make up the distance quickly before he gets a shot off. Block with your shield as you approach if you’re worried about it. 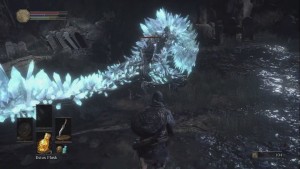 If you’re feeling ready for a battle head forwards towards the small pool of water. Two Hollows will stand up and attack you here. Continue through the pool and into the small rocky chasm with water waist deep. A message will tell you to Turn Back. Keep going and you’ll face a Giant Crystal Lizard.

The lizard will perform a jumping attack at you and release its spikes. Stand back as it crashes down and then lurch forwards to attack it. As it stands to attack roll out of the way and strike again.

One of its other attacks is to breathe at you and crystals will spring up where you are standing. Keep moving to avoid them.

Once it’s been defeated you’ll be rewarded with a Titanite Scale and be able to pick up the Soul of an Unknown Traveler at the back of the cave area.

Head back out of the canyon and take the path to the left. Curve around the mountain until you come to the bonfire. It’s here that you can rest to restore your HP.

Continue the path down the mountain. You’ll face a few more Hollow. When the path diverges, if you want more experience continue down the mountain to the left to clear out all of the Hollow. At the end of the path you’ll face a Hollow with shield and spear with one of his mates behind him with a crossbow. Examine the corpse near the archer for 5 firebombs.

Now head back to where the paths diverged and take the other path. Perform a dash and jump onto the coffin below. Make sure you pick up the Titanite Shard on the coffin.

Perform a plunging attack on the next Hollow as the help text suggests and then make a run for the Hollow with the crossbow standing in front of the arch. Continue through the arch to your first real challenge. 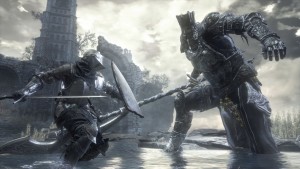 Head towards what appears to be a statue in the middle. Pull out the sword and the giant will stand up. This is Iudex Gundyr and he has tremendous range with his poleaxe. Your best bet is to roll to the side when he attacks. If you get caught out at least throw your shield up to  deflect some of the damage.

If you get too close to Iudex he will literally pick you up and stick you on his axe. Keep moving and strike him in the back.

Once Iudex is down to about one third of his health he’ll transform into a mutated black beast. Once again keep moving and hit him from behind until you win the battle.

When Iudex dies he drops the Coiled Sword which is a key item. Make sure to light the Bonfire and rest up before you leave.

To the Firelink Shrine

Head to the door and open it. Look to the left to find a corpse with a Broken Straight Sword. Not much good in a fight but take it if you want.

Face towards the main path and take the small track down to the left. You’ll come across a small alcove guarded by two Hollows. One of them has a shield. Use strikes that penetrate shields or try kicking the shield away by pressing light attack and forwards. Once past the Hollows you’ll find the Homeward Bone that can be used to teleport you back to a bonfire.

Head back to the main path and continue forwards. Another four Hollows will attack as you approach a tree where the path diverges. The one at the back has a crossbow just to make things difficult.

On the right side of the path is a Hollow staring out. Sneak up behind him and take him out or give him a kick over the edge.

Follow the path and take out the Bone Hound. Behind it is an Ember. Now head up to the entrance to the Shrine.

That’s all for the Cemetary of Ash. Now it’s time to head on to the Firelink Shrine.