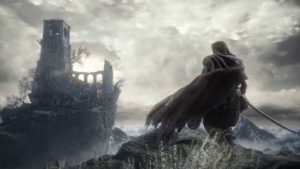 Looking at the Firelink Shrine there are a few paths you can take. If you decide not to go in straight away you can follow the left path around the exterior of the shrine.

Pick up the East-West Shield and kill the two Hollow that are here. Take the stairs up and to the right to grab another Ember. Sneak around the side to the right of the path and pick up another Homeward Bone on a skeleton before heading back.

Head back to the entrance and go inside. 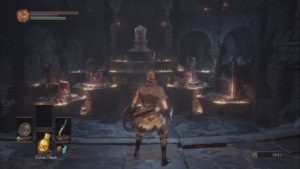 As you enter the Firelink Shrine you’ll find a crestfallen knight down the stairs to the right. His name is Hawkwood the Deserter.

The Lady in the center is the Fire Keeper. She’ll tell you about the Lords having left their thrones. You can also level up here. Make sure to light the fire after you finish speaking with her by embedding the Coiled Sword in the bonfire.

One of the thrones still has someone sitting in it. The throne to the left of the large central one. His name is Ludleth of Courland.

Continue further into the Shrine and you’ll find a handmaid sitting on the right. You can buy and sell general items from her including torches.

Up ahead is the Blacksmith, Andre, hammering away at a sword. He can reinforce, repair and infuse weapons and equipment. Reinforcing weapons requires Titanite whereas infusing requires the use of Gems. Have a chat with Andre to get more information about how it works.

Speak to the Handmaid and purchase the Tower Key. This will cost you 20,000 souls. To get to the Belltower go to the entrance of the Shrine, and facing outwards, take the stairs up to the left. Head out the top exit to the right and notice the Giant Tree here which sometimes drops seeds.

Go up now to the Tower Gate and grab the Soul of a Deserted Corpse on the left before opening the gate and going inside. Climb up the tower and then go across the walkway. Halfway across you’ll notice a blue twinkling down on the right. You can jump onto the Shrine roof on the left and then down to the ground to fight the creature which will drop Twinkling Titanite. Make sure you kick open the top of the ladder that leads from the ground to the roof so you can climb back up it once you have the Titanite.

One the edge of the Shrine roof you’ll notice a large nest. Go over to it and a strange bird-like voice will talk to you. 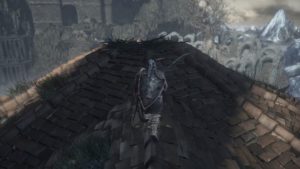 Give it a Firebomb and it will give you a Large Titanite Shard as a reward. Climb back up the ladder to the roof. Along the side of the roof is an entrance into the rafters.

Carefully walk along the rafters to find an Estus Shard. One of the rafters ends directly at a wall instead of at a walkway. This is a secret wall. Hit it to break it open. Continue along this rafter and drop down at the end to find a chest with the Covetous Silver Serpent Ring inside.

Now drop down and go back up the Tower, across the walkway and into the Belltower. Take the elevator up, go outside, follow the stairs up and grab the Fire Keeper Soul.

As you head out to the right you’ll notice below you a corpse with items on it. Carefully drop down. You’ll take some damage but will hopefully survive. Here you can pick up the Fire Keeper Robe, Fire Keeper Gloves and Fire Keeper Skirt.

Drink an Estus Flask before dropping all the way to the ground. Among the corpses here is an Estus Ring.

Go to the bonfire and use it to warp to the High Wall of Lothric.

Next Part: High Wall of Lothric