Just after you get the notification that you’re entering Rusu Mountain you’ll notice a Warp Stone on the left side of the path. The bridge across the river is broken so you’ll need to find another way across.

The kids will point out to you Rusu’s House on top of the mountain. Jump into the water behind them and climb up onto a rock. Jump across the gap and use the Rot Wisps on a rock to uncover Rot Wisp #1. 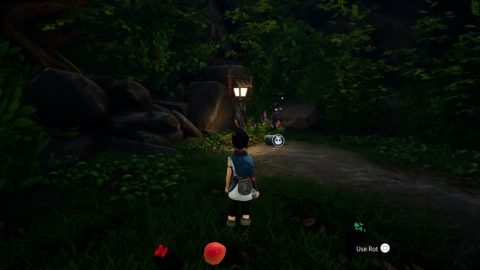 Come back the way you came and follow the path under the wooden arch. Continue along the path to a corrupted area where you’ll have another fight with some small critters. 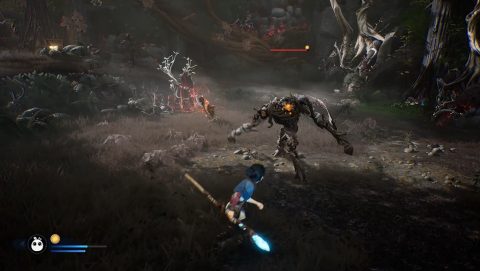 Search around the area for a stone. Use the Rot Wisps to pick it up so you can find Rot Wisp #2 for this area. 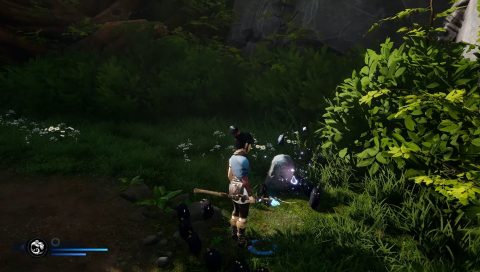 Head up the stairs and follow Taro’s Memory to a Shrine. You’ll be prompted to use your mask and then a cutscene will begin. After the cutscene a tear of the forest will drop down. Use it to clear out the nearby corruption. Follow the path that has opened up to a Flower Shrine. Use the Rot Wisp Tear to interact with it to clear the shrine.

Go back the way you came and continue follow the path upwards. You’ll need to jump across a gap to the painted ledge on the other side. 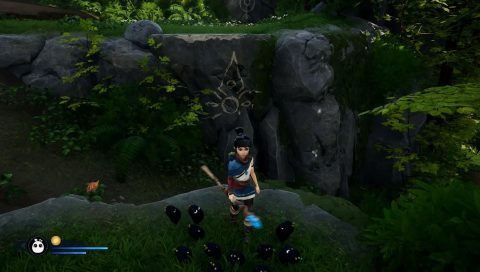 Jump up the next ledge and turn around. You’ll need to jump across the dirt and jump again to the next rock before you slide down. On the other side you’ll find Rot Wisp #3. 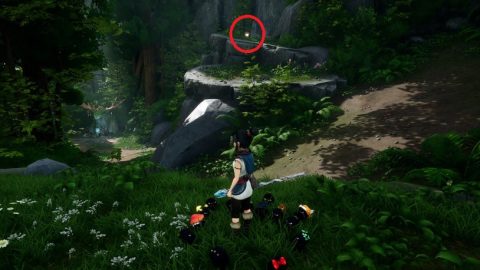 When you see the kids sitting on the edge of the cliff look over the side. You’ll notice a flat ledge. You can drop down to it. 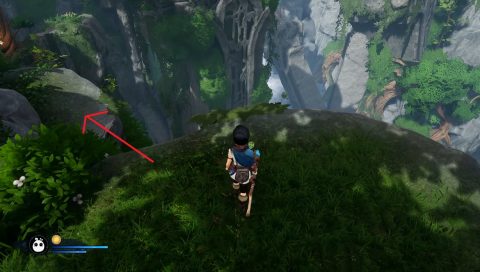 Continue dropping down as far as you can go and at the bottom you’ll find Rot Wisp #4. 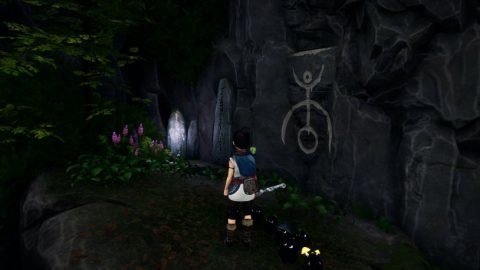 Climb back up by using the white paint on the edge of the rocks and follow the path to the slippery clay. Jump to the rock in the middle. Turn around and jump to the stone steps towards the stone islands. Jump your way over to them. 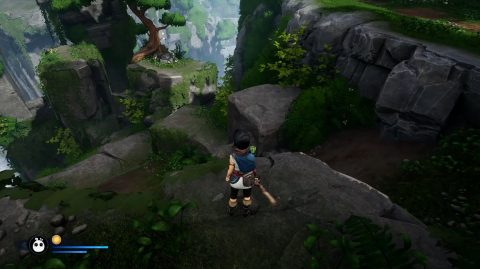 Jump across the gaps and before climbing up shimmy around to the right instead. Climb into another cave for this area’s only Spirit Mail. 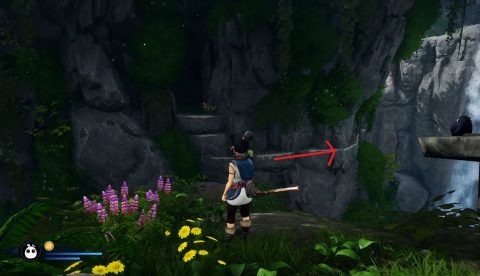 Climb back around to the left and this time climb up into another cave. Run through and continue climbing around the cliffs on the other side. 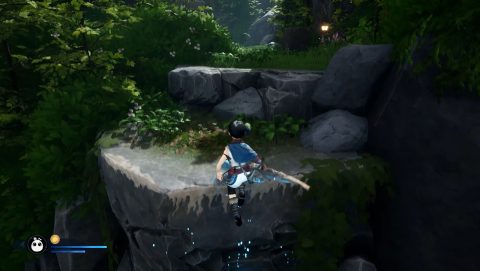 Use the Rot to grab the block and place it by the cliff with the paint. Use it to jump up and you’ll find a small clearing with Rot Wisp #5 under a stone slab.

Drop back down and follow the path away from the cliff. You’ll soon spot the kids again. They’re sitting by a broken bridge. Ignore the bridge for now and go to the right.

On a clear area of grass you’ll find a blue jar for the Rots and a Cursed Chest. Defeat all 4 enemies without getting hit and you’ll get the Bird’s Nest Hat.

Go back to the bridge and use the Rot Wisps to pull it tight so you can run across. There’s a lot of corruption here so get ready for a fight. Run towards Rusu’s House and then down the path to the left to find the source of the corruption. 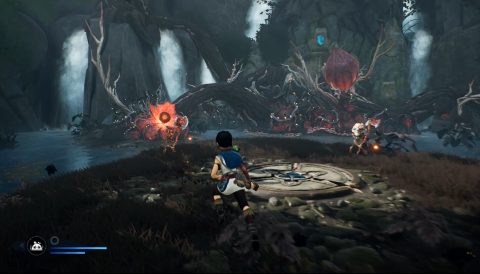 Make your way through the cave and you’ll find a cavern where you’ll face Kappa.

This boss likes to throw molten rock at you from a distance. He’ll dive back down into the lava if you get close making him difficult to fight. Wait for him to start to throw something and dash towards him. You’ll get in a few strikes before he disappears. 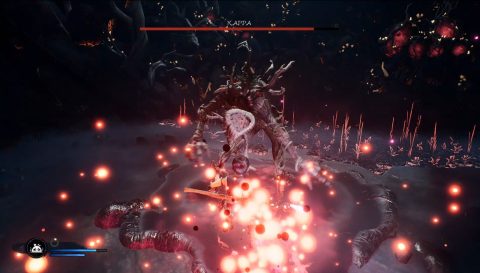 Once his health gets below 50% he’ll stand on top of a ledge and rain down molten lava. Dodge and roll out of the way until he comes back down.

Finish him off by sprinting towards him, using Rot as he throws rocks at you and striking at him. Use the Wisps and a pulse on the bulb to clear the path forwards.

Ride the lift up to the top and the kids, Beni and Saiya, will be waiting for you. Follow them to meet Rusu and watch the cutscene. He’ll show you how to use the staff as a bow. From now on you’ll have a ranged arrow attack.

You can jump and use the Left Trigger to slow time as you aim. This an also be used to glide further across gaps. Jump and slow time and you’ll jump much further than normal. For now use the spinning targets to practice. 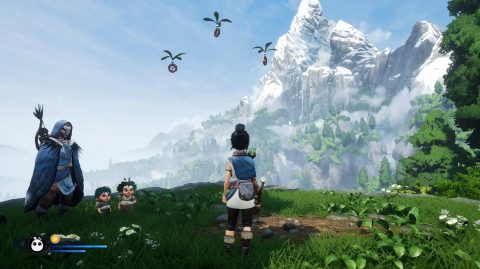 Head down the steps to the central area and Rusu will give you more advice and another chance to practice your bow skills.

From here you can take the path to the left and you’ll notice a purple sphere hanging down for the tree. Shoot it for Rot Wisp #6. 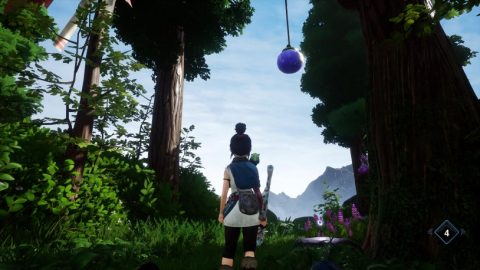 There are a few other places where Rusu will appear and give you some more challenges. When you’re done follow the path south away from Rusu’s house. You’ll notice more corruption.

Slide down the hill and take out the enemies. Watch out for the creatures on the other side of the large gap. You’ll need to shoot them with your arrows.

Once there are no more enemies use the Rot Wisp on the Corrupted Bulb and shoot it with an arrow to clear the corruption. Hit the target to lower the bridge and run across.

Ignore Rusu to the left for now and jump the gap to the right, shown below. 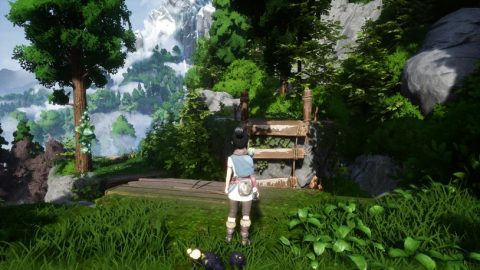 Grapple across to the flower and you’ll find the first Meditation Spot where you can rest and get a small permanent increase to your health.

Jump back and talk to Rusu. He tells you that the broken path leads to his house. Slide down the path. If you want more currency shoot the flower along the way to grapple up to a ledge with a chest. Otherwise keep sliding down to the bottom.

You’ll first be attacked by Monkey creatures from the trees. Use your bow to kill them. Five will appear in total. Once they’ve been dealt with you’ll face the Wood Knight. 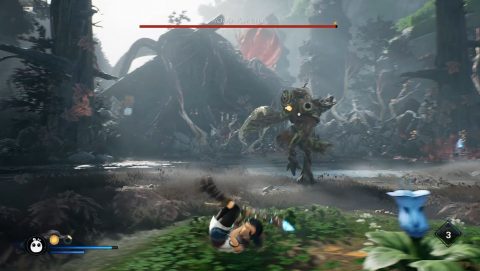 The Wood Knight hits really hard and can take a ton of damage. You’ll want to use the Rot Hammer to whittle away his health as quickly as possible. He has a few attacks, the club stab, club swing and club throw. Dodge out of the way at the right time to avoid the attacks or use your shield.

Look for the yellow weak points on the Wood Knights body. If you can hit them with an arrow he’ll take extra damage and drop Rot Power.

If you get low on health use the 2 Flowers. This boss is good practice for learning how to dodge or parry attacks at the right time. Once he’s defeated use the Rot Wisps on the Corrupted Bulb and you’ll be rewarded with Rot Wisp #7, #8 and #9.

Enter Rusu’s house and use the Wisps to open one of the drawers. Inside you’ll find Rot Wisp #10. 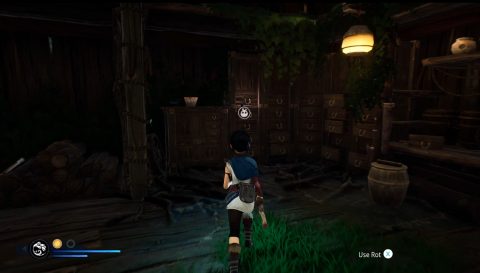 Rusu has a small garden out the front. hit the target with an arrow to reveal a Blue Drop. Bring it to the flower garden to grow a Forest Tear. Use the Tear to grow the garden bed.

A squash will grow out of the garden. Use a pulse to reveal Rot Wisp #11 and a Hat. 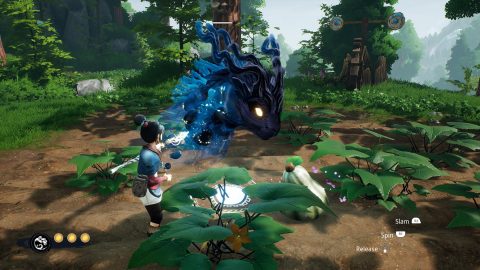 Look around for the Owl Shrine. Nearby there’s an Owl Statue that’s fallen over. Have the Rot pick it up and bring it to the other statues for some Karma.

Look for the nearby orange flowers. Use a Pulse to discover Rot Wisp #12 hidden among them. You’ll also get a Flower Hat for finding it. 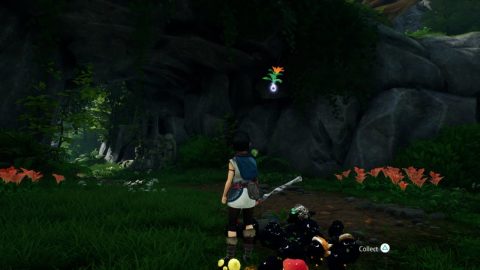 Make your way back down to the base of the mountain. You’ll spot a small island in the river. You should have seen it before but found no way to reach it.

Now that you have the bow and arrow you can shoot and arrow across to the flower and grapple over to the island. Use Pulse to find Rot Wisp #13.

Open up your map and you’ll see that your next objective is to meet Rusu in the Forgotten Forest.