Osaka Castle is the introductory mission to Shadow Tactics although there are still some tricky parts that will keep you on your toes. You’ll have control over 3 characters by the end of the mission, Hayato, Mugen and Takuma. With most missions there are numerous paths to victory so feel free to experiment and find out what works for you.

As soon as you begin the mission run to the left and jump over the gap. Climb up the vines and make your way around the rocks to the right. There are some scrolls along the way with gameplay tips and small tutorials.

Grapple up to the branch, walk along the ledge and drop down to take out the guard beneath you. Run to the fence and wait for the guards to move off before running into the house. Exit out the other side and quietly take out the guard standing on the lookout.

Grapple up to the roof of the house and once more to the top level. Run across the roof to the far left side (there are some guards on the ground to the right), and drop down to the ground. Either kill the guard in the open area or just sneak past behind him. When you get to the bushes duck down and crawl into them.

Crawl towards the rocks and throw a rock to distract the 2 guards. When they’re looking away run into the bushes and duck down again. Drop down to the lower area and crawl towards the crates. Pop out and throw a Shuriken to kill the guard. Pick it up and take out the second guard on top of the ladder. Climb up the ladder and down the other side. Turn the wheel in the corner to create a distraction for Mugen.

With Mugen now, walk up to the wagon and throw a Sake bottle in view of the guard by the stairs. Walk around the wagon the other side and take him out. Pick up the Sake bottle and crawl through the bushes towards the three guards. Leap out with the Sword Wind to take them all out. Use the Cannon to blast open the doors to let Hayato through. 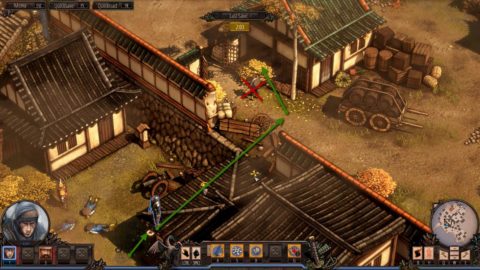 Grab onto the grappling hook and climb onto the roof. Climb up to the second story and drop down to take down a guard on the balcony. Jump down when the 2 guards wandering around are out of sight and Shuriken the resting guard in front of the gate. Hide the body in the bushes and bring Mugen through the gate. 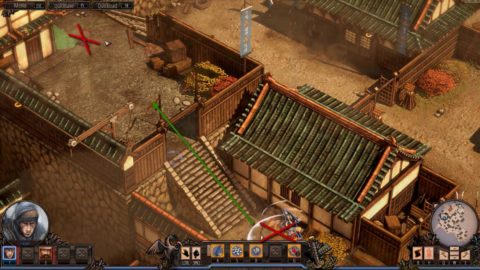 Hide in the bushes and use the Sword Wind attack on the 2 guards as they walk past. Bring Hayato up the stairs and Shuriken the guard up the top as he turns away.

With Mugen use Sword Wind on the 2 guards by the corner of the house and then use any method you like to take out the 3 guards one-by-one leading up to the gate. Make sure you check the view cones of the 2 guards on the other side of the gate. When they are not looking quickly open the gate and have Mugen duck down in the northern bush and Hayato in the bush to the south. 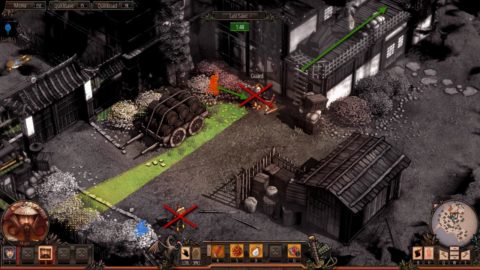 Use Shadow Mode to target both of these guards and take them out at the same time. Then climb up the ladder and crawl along the building. To get down the other side without the straw hats seeing wait until the third guard comes up to talk to them. You only have a few seconds so send Mugen down the ladder, around the bushes and the use Sword Wind to take out all three of them. Enter through the gate. 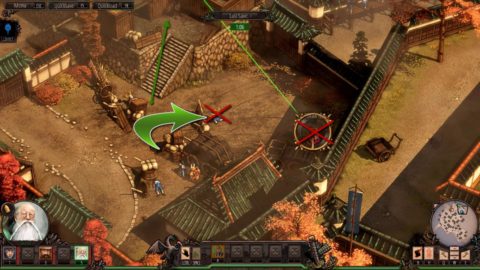 Now you have Takuma to help you out but you only have 7 shots. Use Takuma to take out the guard to the left. Have Hayato throne a stone behind the guard in the middle. Then stand up, run around the barrels and use a Shuriken to take him out. Sneak up the steps and hide behind the wall. 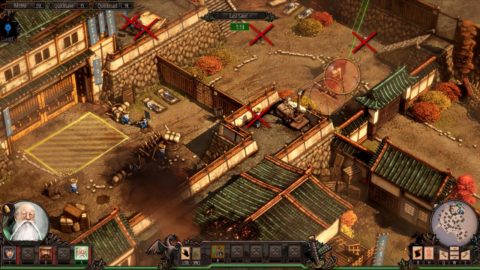 Use Takuma to snipe the 5 guards around the open area. You can use Mugen and Hayato to help but it may be easier to just snipe them all. You’ll need to time the shots so that none of them can give a call and awaken the other guards. 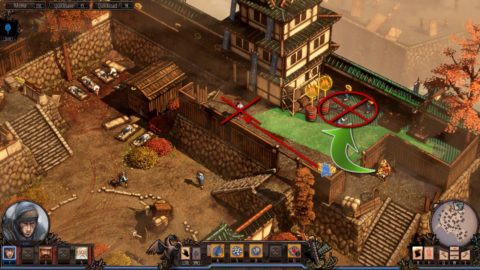 Position Hayato in the bushes and Mugen behind the wall. Go into Shadow Mode and take the standing guard down with a Shuriken. Use Mugen’s Sword Wind to take out the other 3 guards. Have Mugen pick up an explosive barrel and carry it through the open courtyard. The way should be clear now. If not then pick off any remaining guards. 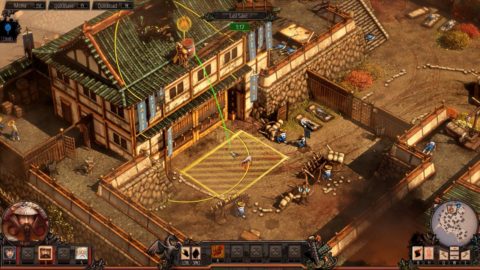 Throw the barrel onto the rooftops and climb up after it. Run around on top of the roof until you’re above the entrance. Throw the barrel off the edge and shoot it with Takuma to destroy the front gate and complete the mission.