In this mission you must infiltrate Lord Yabu’s Palace and kill him by either putting poison in his tea or shooting him from the safety of a guard tower. You’ll have Hayato, Yuki and Takuma to work with. In addition to their normal skills they’ll each have a short-range hand gun to take out the enemies and Takuma has a special grenade for large area damage. 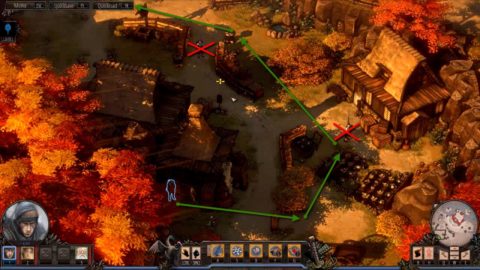 Take out the first two guards in whatever fashion you choose. There are a couple of civilians wandering around to the top left but they won’t cause any trouble even if they see you.  Have Hayato and Yuki grapple up to the rooftops and jump across to the side of the cliff, above the Straw Hat Guard. 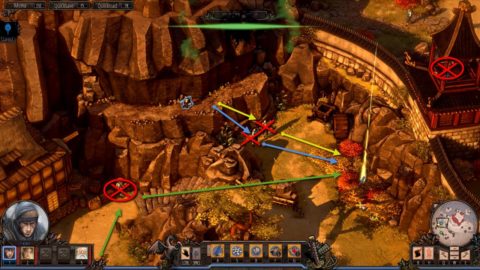 Takuma can use his long range rifle to take out the Straw Hat Guard at the base of the cliff and the one in the tower. Takuma may need to take out the civilian that comes out of the building closest to the cliff to avoid him raising the alarm. Bring Hayato and Yuki on the cliff ledge above the guard and the civilian. They can both jump down simultaneously to take them both out at the same time. Drag them into the bushes or the well to hide the body.

There is another guard on patrol so time your attack for when he’s facing away or use Takuma’s Taku creature to distract him for a while. Bring Takuma into the bushes as well and get ready for the next part. 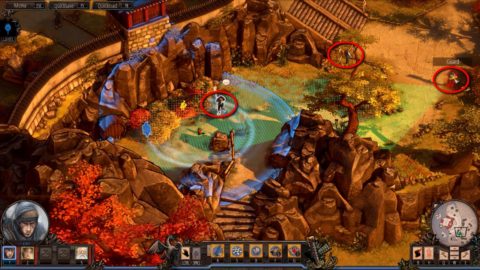 There are three guards that need to be taken down before you can deal with the Samurai guarding the gate. You’ll need to draw them off one-by-one by using Taku or Yuki’s flute. Draw each of them out so they’re not in sight of either the Samurai or the other guards and kill them with whatever method you find most effective. Crawl up to the bushes closer to the stairs, if you haven’t already.

To take out the Samuria without Mugen you’ll need to use two attacks simultaneously. Go into Shadow Mode and have Takuma ready to shoot with the rifle. Have Hayato ready with a melee attack. Crawl Hayato as close as possible to the Samuria and then start the shadow mode attack. As the Samurai reels from the bullet wound Hayato can finish him off. Takuma’s work is done for the day so you can just leave him in the bushes for now. 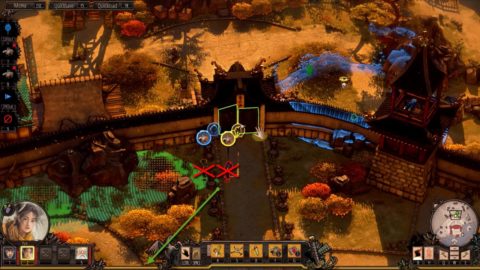 Bring Hayato and Yuki up to the gate and once more go into Shadow Mode. Have them both target one of the guards on the other side of the gate with their pistol. Open the gate and use Shadow mode to take out both guards simultaneously.

Run them both towards the Palace and have them grapple up onto the roof using the hook on the corner of the building. 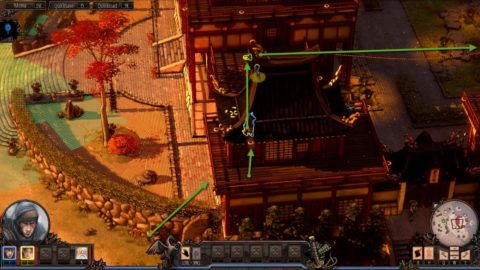 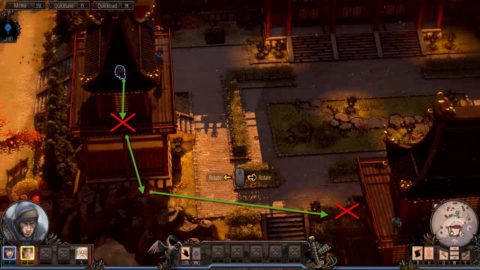 Drop down onto the guard on the balcony below when he’s underneath you and then jump into the bushes. A samurai is patrolling the courtyard so watch out for him and then sneak across to the bushes next to the civilian standing by the bell. Kill the civilian and drag her into the bushes. There’s one more guard you need to take out before heading to the small island. 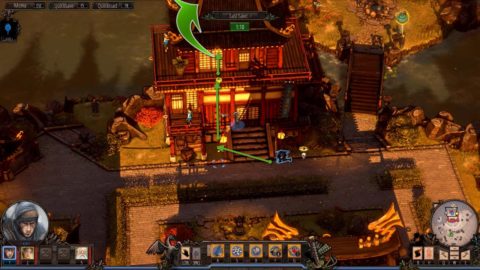 Bring both Hayato and Yuki across the front of the rear building and then have them grapple up to the rooftop. Drop down on the other side and onto the guard patrolling the balcony. From there dive into the water. You’ll need to clear the small island of guards before you can ring the bell for the tea lady. 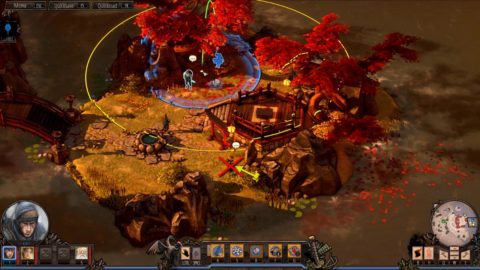 Swim Yuki around to the right and Hayato to the left. Have them both crouch down in the bushes on either side. Use a Rock to distract the guard from Hayato’s side so that Yuki can kill the Star Hat Guard just in front of her.

Now have Yuki play the Fflute to attract the guard in the center. Once again as the guard gets close have Hayato use a Rock to distract the guard near him. Yuki can take down this guard and hide him in the bushes as before. Two down, three to go.

Hayato can take care of the rest. Take out the guard standing still in front of him when the other guard goes on patrol. Hide him in the bushes quickly and then take out the remaining two guards. Hide all of the bodies.

Quickly bring Yuki and Hayato into the water. Swim them near to the bridge so that when the Samurai cross they can get out and run over the bridge behind them. It’s only a matter of time before Lord Yabu dies so make your way as fast as you can back to Takuma and then bring all three of them back to the starting area to finish the mission.