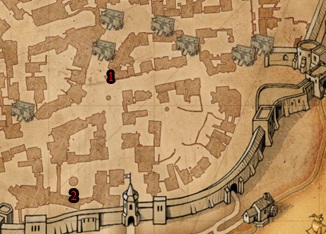 This quest begins when you talk to Triss at her house (#1) at the beginning of the chapter. The reception is put on by Declan Leuvaarden and is being held at the New Narakort Inn (#2). You can only enter the party after 18:00.

At the reception Triss will introduce you to the most important guests. Some of them you have met before, Declan Leuvaarden, Thaler, Velerad, Princess Adda, Count de Wett and Erkin von Blunt. After the introductions you’ll be left to mingle with all of the guests. Have a chat with all of them to find a few clues about what’s going on.

When you speak with Princess Adda the second time she’ll dismiss Count de Wett. You’ll have a chance to speak with the princess alone. Compliment her and she’ll mention that she has a secret whim but it’s up to Geralt to find out what it is. Talk to Thaler and Velerad about her to find out that it’s a kind of dish. Thaler won’t speak further until you steal a Mysterious Note for him from the private bedroom and Velerad won’t talk until you give him some strong alcohol.

You’ll discover the Princess likes Catoblepas Meat. There’s no way to get it now so talk to Triss and ask her to conujure up some for you. Present the dish to the Princess and you two will make a little love in the private room.

After your little tryst with Princess Adda, Triss will burst in and tell you to go and see Leuvaarden. He’ll give you some details about his plans which will trigger two new quests, Following the Thread and Lock and Key.

Now that the reception is almost over it’s time to have a talk with Erkin von Blunt. He’s not too chatty? Nevermind, maybe he’ll enjoy a drinking contest. It’s good to have a Wive’s Tears potion on you to rid the effects of alcohol after the contest. If you win the contest he’ll give you the House of the Night Signet Ring and tell you why he’s really here.

Next: The Source
Back: The Witcher Chapter 3