Now that you should be familiar with the basic game mechanics from chapter one I’ll move through the following levels a little bit quicker and just focus on solving the puzzles and all of the secret locations.

Jump up and hook onto the can in the rubbish bin and pull it down. 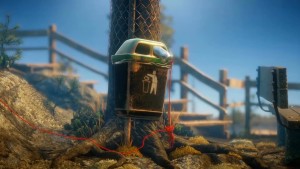 Push the can all the way to the bricks on the right and climb up. Jump onto the telescope, build a bridge between the telescope and the chair. Use it to jump onto the back of the seat and then up to lasso onto the sign. 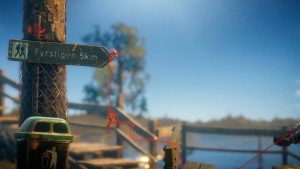 There’s some extra yarn you can grab on the sign. Hook and lasso your way up the tree. You’ll need to build a bridge to jump over to the tree on the right. Grab the extra yarn and jump and lasso over to the kite. 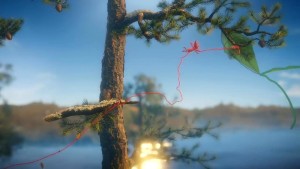 The first secret of this level is almost impossible to spot. It happens during the kite section. You’ll need to position yourself near the top of the trees. A tree will pass in the foreground and a little while later the coin can be spotted in the leaves of a branch. 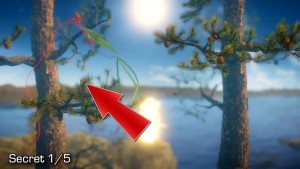 The kite will drop you on another tree. Grab the yarn and start dropping all the way down to the ground. There’s some more yarn you’ll need to grab about half way down close to the tree trunk as well.

At the bottom push all the nuts along into the hole so you can climb up the other side.

The second secret is find in the water, just to the left of the rock in the middle. Jump down and then back up quickly as Yarny doesn’t like to be left in the water. 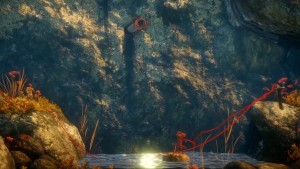 Swing up to the top of the rocks and over to the right.

Grab the small branch and pull it down, clearing the way so you can climb over the small hill. 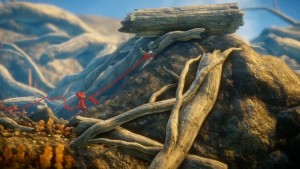 To find the next secret drop down under the pier, grab the yarn, rappel a little from the top hook to move the latch and then walk to the left all the way to the end under the pier. 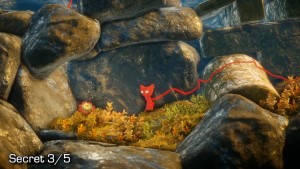 Now go pack to the sea and lasso and swing all the way across. 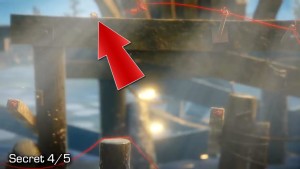 When you get to the small pond, climb up the rope and grab the mussel. Push it into the water and a grab will go down to pick it up. Jump onto the crab and over to the other side. 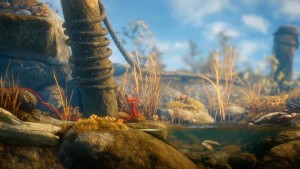 Hook onto the lever on the wheel and pull it down. Make a yarn bridge and drag the mussel over it to the crab on the left. The crab will take it into his cave so you can grab the extra yarn. 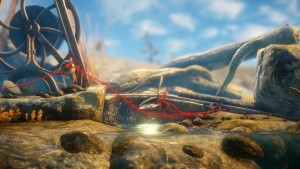 For the next part grab the floating device and place it under the stick measure. When a wave comes it will lift up the stick so you can walk underneath. Try not to get washed away by the waves! 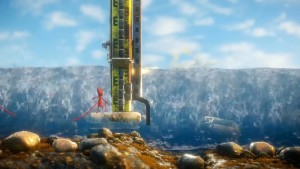 You want to take the float with you to the next section so build two yarn bridges as shown in the pic below so you can push it across. The waves will lift it up to the first yarn bridge. 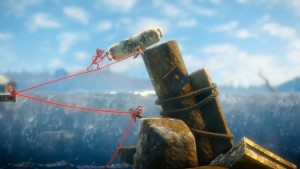 Push the float across, jump on it and let the waves lift you up so you can jump across to the other side of the beach.

Lasso onto the wheel so you can lift up the cage. When the crab grabs the mussel drop the cage on him. As he walks across to the right jump on the cage to take a ride over the water.

Pull out the two metal spikes and climb up and over to the right. 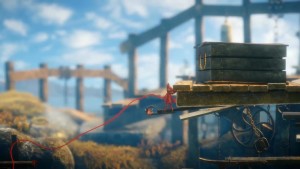 Swing across the crabs and hook onto the door. Pull your yarn around the log so you can get some leverage to lift up the door and go inside. 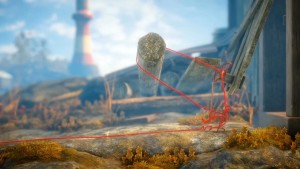 Once inside make a yarn bridge to jump up to the ledge. Push the two boxes to the far right and the ledge will lift up. You can now lasso across. Stay to the top and continue swinging across to the right until you find the fifth secret.

Drop onto the boat. Pull the handle to start the motor and move the motor to cut the rope. This ends the chapter. 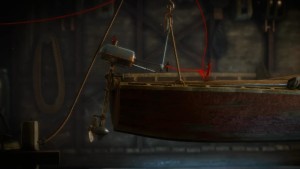