Drop down to the ground and head over to the right. Pull the rock from under the log so the log drops down allowing you to walk over it.

When you reach this log, pic below, lasso onto it and pull it down to reveal a cave entrance behind it. 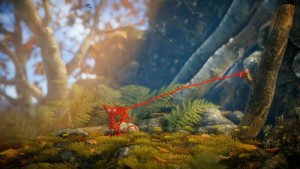 The first secret is found as you enter the second cave system. Drop down into the first little alcove to pick it up. Some rocks may fall in this area as you step on them so tread lightly. 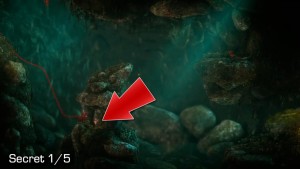 When you bump into the gopher run back to the left and let him crash into the mushroom. He’ll destroy the mushroom but give you a tying point for making a bridge. Jump onto the bridge and climb up. 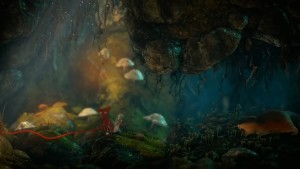 When you come to the checkpoint on the tree make bridges up until you see the bird house. Build a bridge across to the bird house and jump up to the little branch with the second secret. 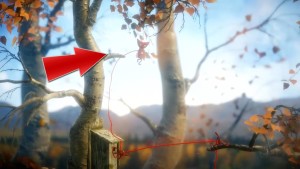 Drop down to the right for another run-in with the gopher. He doesn’t like the fumes from the mushrooms when you step on them. Slowly move to the left and when you are close enough lasso onto the boat and pull it out.

Push the boat into the water and ride it across. Yarny will lasso the fish for a faster ride!

For the third secret grab the rusted can and push it back to the left onto the ground. Now push it to the right into the cave all the way to the right to lift the see-saw up on the left. You can now get under the see-saw for the secret. 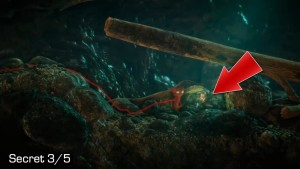 For the next secret you’ll need to release the rock at the top left of the cave system. while you’re there you can also pull the bucket down to the ledge below where it started and push it all the way to the left.

Now drop down and push the rock across. You’ll need to make a little bridge for it so you can push the rock to where it needs to go. 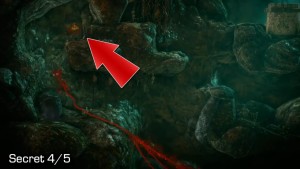 Untie the bridges and climb up to where you pushed the bucket. 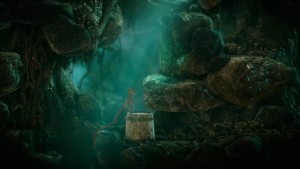 Continue up until you come out of the cave and find the next extra yarn checkpoint.

Pull the cotton reel down and tie a knot to it and the tree branch above it. Push the rock over the edge so that the tree is pulled down. You can now climb over it to the next tree. 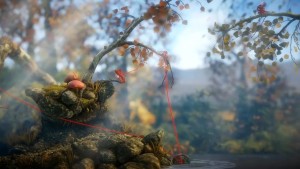 Climb the trees as you would normally do and at the far top left hook onto the blue plastic bag to float down to the ground. 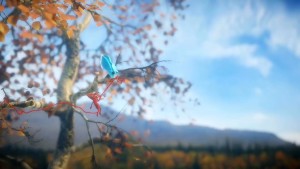 Climb over the wood cabin and open it from the other side. Logs will come rolling out so you may want to hook up to a tree branch hanging over the river to get out of the way. Inside the now empty cabin is the fifth secret. 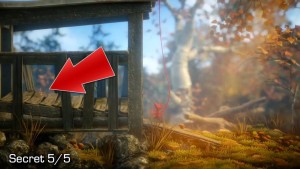 Walk over the bridge to end the level.