Objectives: Stay ahead of the Northerners and evacuate the villages before they’re overrun. For the Gold Token you’ll need to rescue all 10 villages.

Special Rules: The Northerner Horde begin each map lined up on the eastern side. They will move one step closer each turn. You’ll need to get to each village and convince the villagers to evacuate before the horde arrives.

Tips for the Gold Token: To gain the Gold Token for The Hanged Man you’ll need to rescue all 10 villages. This means you can’t let a single one fall into the hands of the Northerners. Map reveal cards such as Grimalkin, The Lost Boy and Spyglass will help you to locate the villages so you can move straight towards them. If a Northerner Horde gets too close attack them and their token will be reset on the eastern side of the board.

With your deck constructed you’re ready to fend off the Northerners. For the first map the location of the villages will be revealed. Move immediately towards them and warn them of the horde. If you fail the Gambit leave the village and come back for another chance. The Gambit will be easier the second time around.

Continue clearing out the villages throughout each of the map locations and when you’re done head to The Capital for the final confrontation. 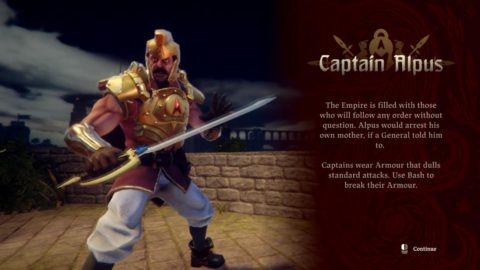 There’s nothing special about Captain Alpus except that he has a Pistol for a ranged attack. Bash off his armor and then defeat him with regular blows. Once  he and his Soldiers have been killed the quest will be completed.