Objective: Find out which of 3 Assassins is plotting to kill Father Galfri. You’ll need to go on a mission with each of them and then put the clues together to discover who is guilty.

Special Rules: There are 19 clues that you can discover by talking to people and being successful with the encounters. If you find all 19 clues and then defeat the Assassin you’ll win the Gold Token. If you don’t find all the clues you’ll be give the Silver Token.

Quick Tips For The Gold Token: There are 19 Clues in total. You’ll get the first 7 Clues by speaking with Father Galthri in the beginning. Make sure you exhaust all dialogue options with him. Speaking with the three suspects throughout the quest will give you another 4 Clues. Once you reach the Inn for the final time you should have 10 Clues. Speaking with Father Galfri again will give you 1 more clue for 11 in total.  For the final 8 Clues you’ll need to finish the quest with 90 Gold so that you can pay each suspect 30 Gold for more information. You’ll also need to drink with both Borden and Grindan.

The Mulberry Inn: You begin at ‘The Mulberry Inn’ where you meet one of the leaders of the Thieve’s Guild, Father Galfri, who received a letter claiming that he will be assassinated in three days time. The suspects are part of his guild, Borden, Rowena and Grindan. You’ll go on a mission with each of them to learn more about them and to try and figure out which one is the assassin.

The first thing you’ll learn from reading the letter is that the assassin favours theatrics over secrecy. Keep this in mind when questioning the suspects. While you’re here you can ask Father Galfri for more information about each of the suspects. You should explore all of the dialogue options as you’ll find a few clues.

Borden has worked with Father Galfri for a long time and that he speaks the truth when drunk.

Rowena has also worked for Father Galfri for a very long time and was in the 3rd Legion of the Empire army. She will always tell the truth for money.

Grindan has only worked for Father Galfri for a short while. He makes exaggerated claims and wild accusations when drunk.

When you return to the inn Father Galfri will tell you to go on a job with each of the suspects. After each job you’ll return to The Mulberry Inn.

Borden: Father Galfri has sent Borden off to Shipwreck port to buy some stolen lamps. Head to ‘The Guild’ to meet Borden. During the wagon journey to the port, Borden will ask what you think of Father Galfri. Tell him that “you are proud to be working under such a great man”. When you reach the port the pirate will want you to spill your blood. Agree to this and Borden will trust you a little more.

When you arrive at the drop-off point Borden will feel bad about asking you to give blood. “Attempt to comfort him” and you’ll have to perform the precision gambit to be successful. Now that you’ve gained favour with Borden you can ask him questions about Father Galfri, his favourite food, family and past. You should gain as much information as you can. If he doesn’t trust you you’ll need to bribe him with gold. When you are finished with this job ‘Return to Mulberry Inn’.

Back at the inn you can go on another job or talk to Father Galfri about the goblin problem. He’ll give you the Thieve’s Folly ring so that goblins will only steal the ring first and not one of your other valuables.

Rowena: She has been given the job of kidnapping a child of Lady Fielding. You’ll meet her at ‘The Guild’ but you may want to explore the rest of the map first.

In order to impress Rowena you’ll need to defeat the Empire soldiers within 90 seconds. If you can do this she’ll be more likely to trust you. After the battle Rowena will attempt to take the child but instead she’ll take a bribe from the Lady. “Swear yourself to secrecy” and you and Rowena will get along just fine. Now you can ask her all the same questions that you asked Borden.

When you are finished questioning Rowena and have completed all of the encounters that you want to complete ‘Return to the Mulberry Inn’ to speak with Galfri again.

Grindan: The third suspect is Grindan. Father Galfri will ask you to go with him to stake out the castle Moor-hammer Lake. Once again ‘The Guild’ card will be placed on the map. You can either go straight for it or explore the rest of the encounters first.

When you meet Grindan he says that the Lady inside is wanted for high treason. He also asks if you want an autograph. Say “Yes”. When he says that he’s not seen you before say that “you’re the leader of the Thieves Guild in disguise”. When he asks what you’re doing here say that “you’re here to personally congratulate him”. Finally, when he asks if you’re planning to assassinate the Emperor say “Yes”.

After the stake out you can question Grindam. Ask him about everything and then continue on your way. When you are ready head to ‘A Death at the Mulberry Inn’. Make sure you have plenty of Gold left over so you can bribe the suspects for more information.

Finding Clues: When you speak to Galfri again he’ll say that the assassin will always lie regardless of their personality. You’ll have a chance to review the clues, talk to Father Galfri and approach all of the suspects. Remember their personalities from the original conversation with Galfri.

Borden and Grindan will have a drink with you but Rowena will only accept Gold bribes. Exhaust all possibilities with them to find all of the clues.

If you haven’t figured it out Grindan is the assassin. He makes wild exaggerations and always lies. ‘Approach Grindan’ and then ‘Accuse Grindan’. This will start the final battle.

Silencer Grindan: Grindan will gather some of his thieves together to help with the battle. Grindan has regular attacks and attacks that can knock you off your feet. Some of his allies throw explosive bombs and have a breath flame attack. 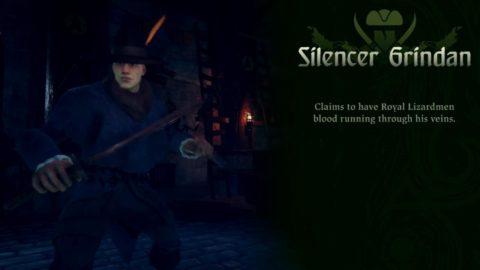 Once the battle is over the quest will be complete. You’ll get the Silver Token if you defeated Grindan and the Gold Token if you also found all of the 19 clues. Completing this quest unlocks Strength, The Hermit and The Wheel.