This can be a tricky mission if you’re not sure what to do but fairly easy once you’re able to unlock the Smuggler’s Ship.

You’ll dock at the Fuel Station. Blow up the barrels behind your ship to pick up some extra ammo. Now go forwards and press the hand on the wall to gain access to the station. Kill the guards, pick up the Shield Units and make your way down the stairs.

The Fuel Station is shaped more or less like a doughnut. You’re currently on the outside edge of the doughnut towards the north. You can make your way around either side and come back to where you started.

Head to the north-east side and enter the circular room on the outside edge. You’ll find an officer here with the Blue Key amongst a few Gran and Trandoshan. 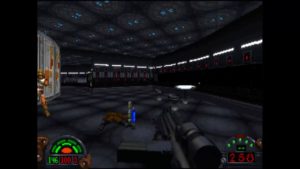 Now head around to south where you’ll find a room filled with Gran throwing Thermal Detonators. Luckily you can explode the barrels to kill them all in one go.

This leads into the center of the doughnut where you’ll have to move a central platform arm around to get to different pillars. It sounds difficult but it’s pretty easy really. The main threat here are the Trandoshans that sometimes appear in the windows up the top of the pillars.

Press the button and walk over the arm to the center. Blow up all of the barrels and try to kill all of the guards below. In order to get over to the next pillar drop down to the floor and press the button, run over to the pillar you started from and go up the elevator. 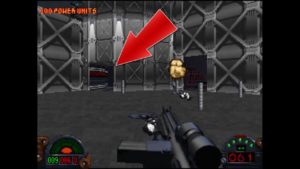 Quickly jump over to the arm before it gets too far away. Stay on it until it stops at the next pillar. Explore around the pillar and blow up all of the barrels on the left side to reveal an Extra Life. 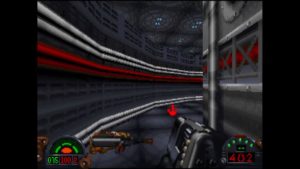 Press the button at the front. Run backwards onto the arm and take it around to the third pillar.

Once again explore around this area. There is a secret wall around the back. Open it and drop down from more Rockets, Mines and Shield Units. If you’re not sure where it is have a look on the map for the little yellow line indicating a door. To get back up crouch down and pull the switch. 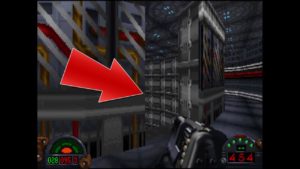 When you are done press the button at the front and run back onto the arm as it takes you to the last pillar to the north west.

There is more to this pillar than the others. To the back you’ll find the entrance into the Fuel Station control center. Pull the switch and go up the elevator. Go up the stairs and take out the Imperial guards.

The white wall is a secret that opens up and reveals a stack of guns and ammo! 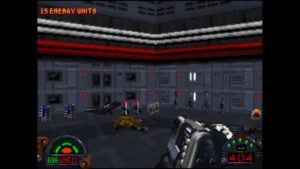 Take either the left or right door. Both lead to the same place and take you around to a diagram which is actually a control switch giving access to the ships docked here. Currently the walkway is open to your ship but you want to change this to the smuggler’s ship.

Click on the diagram on the wall to move the walkway down to the smuggler’s ship so it looks like the picture below. 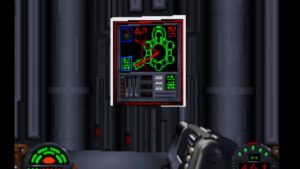 Open the door in the north west. This will take you to the walkway leading to the smuggler’s ship. Go to the front of the ship, pull the switch and complete the mission.

Next Mission: The Executor