Dark Forces Mission 2: After the Massacre

You’ll start the mission being dropped off at a back part of the city. The city has been blown apart so there are multiple paths to take. Find your way to the bridge and go across. If you fall into the water there is another path up to the left. 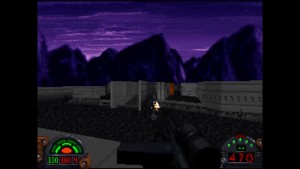 The generator is to the south of the map. Work your way there, cross over to the center of the generator and press the button. The generator will start turning again and power will come back on in the city. 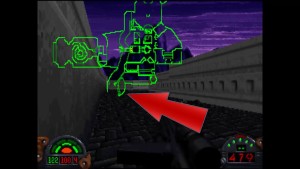 Make your way around to the back of the generator, behind the button, and pick up the Infrared Goggles.

To the north of the city is a platform that you can’t get across to. To get the platform working you’ll need to head to the east side of the city and enter a building with a white door. Kill the guards and press the button to move the platform.

Head back to the north and go to the center of the platform. Press the button and walk across to the other side. 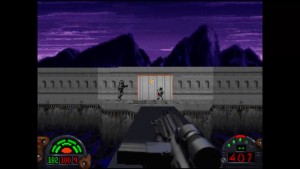 You’ll see a grassed area an another building. To the right is a hole blown into the wall. Drop down into it for more loot.

Inside the building you’ll be faced with a number of Empire guards and officers. It’s not a large building but the Dark Trooper Weapon is located in an upper room on the right side. To get to the top level take the corridor straight ahead and then go up the stairs.

Once you’ve found the Dark Trooper Evidence make your way back to the west side of the city. More Empire Stormtroopers and Officers will have appeared so you’ll have to fight your way back.

Once you reach the landing point your ship will appear to pick you up. Proceed to Mission 3: Anoat City.