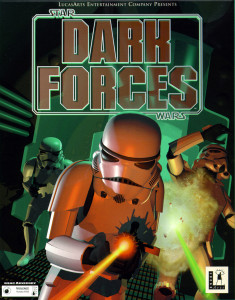 Dark Forces is a first-person shooter developed by LucasArts in 1995 for Dos and the Macintosh. You play the role of Kyle Katarn, a mercenary hired by the Rebel Alliance to find out and stop the Empire’s Dark Trooper Project. The game features fun and engaging levels with  plenty of atmosphere. It’s still and enjoyable game to play even by today’s standards.

The game is set in the time of the legends from the first Star War series. You’ll hear about Princess Leia, Jabba and others as you progress with the story.

Dark Forces added new abilities to the Doom-style of play. You can jump, crouch and run. There’s a variety of weapons to pick up along the way with some of them having two firing methods, such as single fire or burst. In the case of explosives you can have them detonate after a few seconds or have them trigger when someone walks close.

Mission 2: After the Massacre – Talay (Tak Base)

Mission 13: The Stowaway – The Executor

Dark Forces is a FPS (first person shooter) set in the Star Wars universe. It was developed by LucasArts in 1995 and is part of the Star Wars: Jedi Knight series.

Dark Forces uses the Jedi Game Engine which allows for some nice atmospheric effects such as the red haze in the mining facility. I found the level design in Dark Forces was very good and enjoyed the variety the designers added into each level.

There is a very strong following with the Dark Force games and even today fans continue to compete against each other in speed runs. There was also a strong mod community with many maps and customizations for this game.