This can be a fairly tricky mission with lots of small hidden paths. You don’t need to complete it all to end the mission. In fact you can leave out the entire east section and just focus on looking for the evidence in the west.

Drop down off the platform and hit the button that moves the platform back a meter or two. Hug the wall next to the switch to see it. 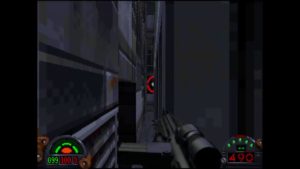 Go inside the little secret for a Mortar shell. Press the switch on the wall to move the sliding wall around and crouch into the entrance. Inside is the Yellow Key. Head up the elevator and drop down onto the ledge with the Yellow Door.

Open the door and head around to the left. You’ll come to an open section where you can see out to a walkway with Gran. This is where the evidence is found. If you’re good you can use a Thermal Detonator to help you jump across to the walkway. Otherwise kill the Gran from here and continue along to the left.

Drop down and watch out for the Trandoshan with a Stouker Concussion Rifle. This is a pretty cool weapon that can target multiple enemies with one shot. Use it from a distance or you will take damage as well! Inside this little area are shield units and ammo.

Continue around through the passageway and open the door on the left with a view out to the Vertical City. 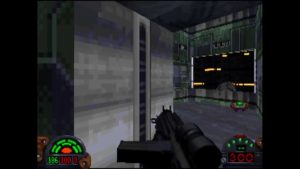 Continue down the passage until you come to a dark corridor with a Trandoshan. Follow the only path around, take the small elevator and continue along, killing the Stormtroopers as you go.

Open the door out to a walkway. You’ll need to jump down to the platform on the left of the walkway in a minute but for more loot go across and open the other door. 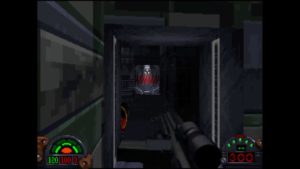 On a ledge through the other door you’ll spot a Stouker Concussion Rifle. You should already have one of these but it will give you an extra 100 Power Units if you grab it. Across the gap is a dark room. Don’t jump across before you throw some TDs to destroy the mines first.

There’s a secret in the small wall. A Stormtrooper has just come out of this one in the pic below. 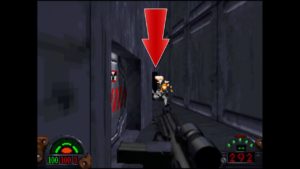 Go in the secret door and duck through the crushers. There’s some Shield Units half way through and an Extra Life in the room at the end. Be careful on the mine as you get there. 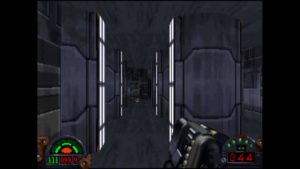 Snake your way around the force fields to the room at the end for the Infrared Goggles. Again you should already have these.

Now go back to the walkway and take the second door. A tricky area with Trandoshans and Gran. To progress you want to find the Blue Key. It’s located to the south west so head in that direction. Go down the small set of stairs and pick up the Blue Key. 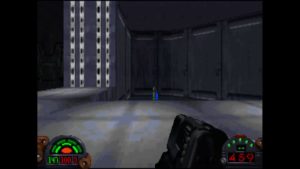 This key opens the blue door about half way up on the west side.

There’s the entire east section to explore as well if you need some extra ammo. The blue arrow in the map below points to the Blue Key and the red arrow to the Blue Door. 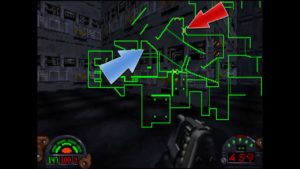 Open the Blue Door and go inside. From here it’s pretty much impossible to get lost. There are a few small side avenues that are dead ends but just follow the main path along until you come to the walkway you saw in the beginning with the Grans throwing TDs.

There are some Imperial Officers inside the room on the other side of the walkway. Take them out and grab the Navigation Evidence. Unfortunately you’ll be captured as you try to escape the planet and you’ll end up on Jabba’s Ship.