Before you attempt this level make sure you have VSYNC enabled. If you don’t Lara may get stuck on some of the areas where she needs to pull up and crawl through tunnels. This also fixes an issue with the T-Rex getting stuck on objects in the environment. To configure the settings for Tomb Raider: Anniversary run it from within your Steam library. You’ll be able to select to play the game or configure the settings.

Walk forwards towards the waterfall and pick up the Cog #1 from the stone step. Turn around to kill the 2 Wolves as they run towards you. If you stay on the first or second stone step they shouldn’t be able to reach you. The large machine on the wall on the other side of the falls needs 3 Cogs to be fully activated.

Make your way along the river and then jump across the broken bridge to the other side. Climb up the handholds and jump backwards to grab the wooden platform. Draw your weapon and shoot the ropes holding the bridge up. 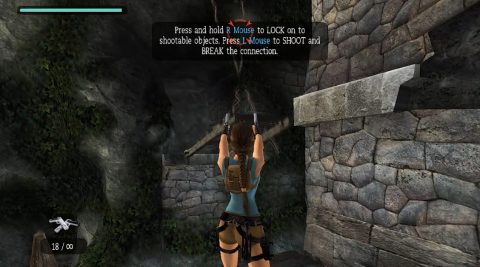 Jump up to the handhold and traverse to the left. Jump back to grab the horizontal bar and swing across the broken bridge to the other side. 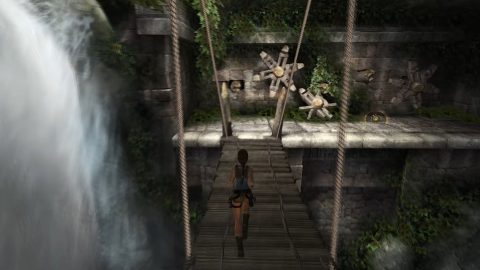 Kill the Bats when they attack and shoot the rope holding this bridge up. You’ll be back here for a secret in a minute. For now swing on the horizontal bar and then over to the handhold in the middle of the falls. Jump up to the next higher hold and then traverse around to the right. Jump up and then backwards to grab the ledge at the entrance to a passage. 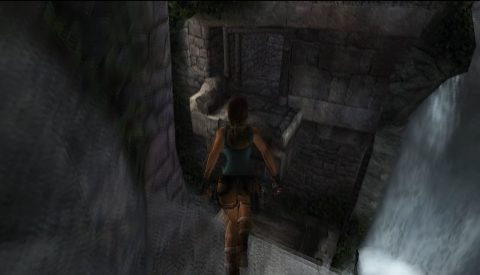 Climb down the broken bridge and jump across to the small hole in the rock to the right. Crouch through the tunnel to find the Shotgun and Large Medipak.

Dive into the water and let it take you to the small pond below. Dive down and go through the underwater passage now that the gate has lowered. Pull up for a secret area with a Small Medipak.

Swim back out and pull up out of the water. Jump back onto the stone step again so you can safely deal with the 3 Wolves.

Once the coast is clear climb up the ladder on the side of the large mechanism. At the first platform use one of the Cogs and then pull the Switch. Part of the machinery will start turning.

Swing across the moving horizontal bars to the ladder and climb up to the second platform. Use the second Cog and pull the second Switch. This will start another part of the machinery turning.

You still need to find one more Cog so grab the handhold to the right of the Switch and make your way around to the right. Jump up then backwards to grab the wooden platform.

Turn to the left and jump to grab the handhold on the side of the rock wall. Traverse across to the right. From here you can drop down to a small passage for an optional Large Medipak or jump backwards to grab the rope. 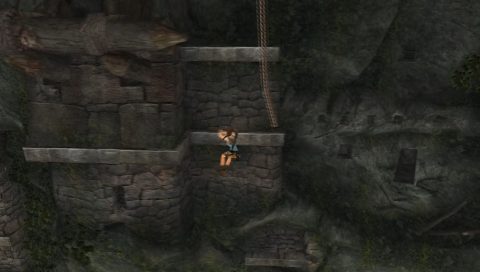 If you take the tunnel for the medipak you’ll need to slide down the ramp to the bottom and then climb back up the mechanism to the same position. Jump up to the higher handhold and then back to grab the rope.

Turn around to the left and swing a couple of times until you have the momentum to grab onto the handhold. 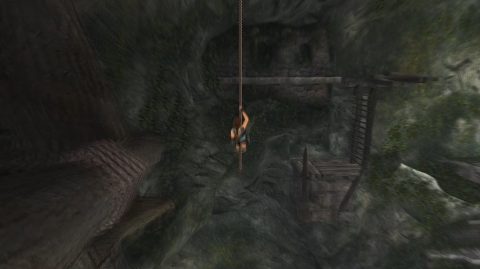 Traverse to the right and drop down to the wooden platform. The bridge will fall over and break but a horizontal bar will remain so you can swing back to an earlier area if you wish.

For now climb into the tunnel and make your way along the passage. When the tunnel opens out a bit you’ll be attacked by a Bear. 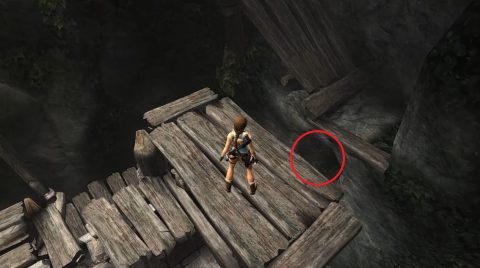 Drop back to the ground and climb up the wooden pole. Jump back to the handhold on the stone wall, jump up to the higher hold and back to the top of the pole. Jump across to the next pole and then out through the passage.

Slide down the wooden board and up the steps by the Shotgun Shells. Turn left and slide on the wooden board. Jump to grab the handhold in front. Jump across to the platform to the right and then turn right. Jump to swing from the horizontal bar and grab the next handhold. Jump up, traverse to the left and pull up.

The path through the next section should be fairly obvious but there is a checkpoint here if you make a mistake. 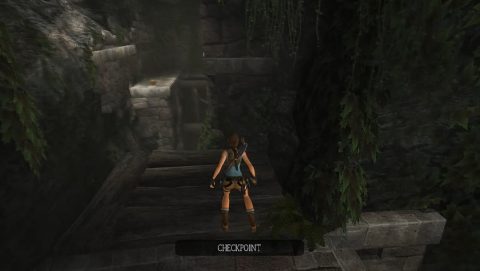 Grab the handhold in front of you, traverse around to the left as far as you can go and jump backwards to grab the hold behind you. Traverse to the right and drop down to the stone platform. You’ll be attacked by a few Bats as you traverse across.

Grab the Large Medipak and crawl through the small tunnel. Continue through the tunnel and you’ll drop down to the Lost Valley.

Once they’ve been killed more will appear along with a large T-Rex. There’s a short quick time event before you take control of Lara again.

The T-Rex has an aggression bar, just under the health, which goes up when you shoot it. Once the bar fills up the T-Rex will charge at you, giving you the chance to dive out of the way and do a headshot. If you do a headshot just in front of the spiked barricade the T-Rex will take a lot of damage. 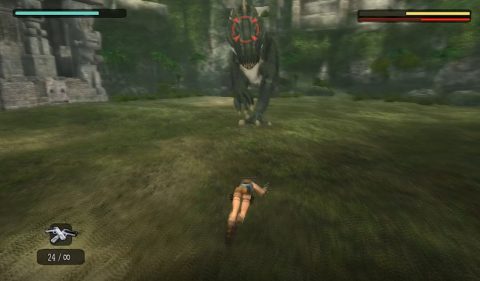 You can of course just shoot at the T-Rex but it will take a long time to bring it down to zero health. Either way, once the T-Rex has been killed it will crash into the front of the temple ruins.

Do a lap around the grassy area to pick up any loot that you might find and then climb up to the temple entrance. Grab Cog #3 and then dive into the water on the right side. 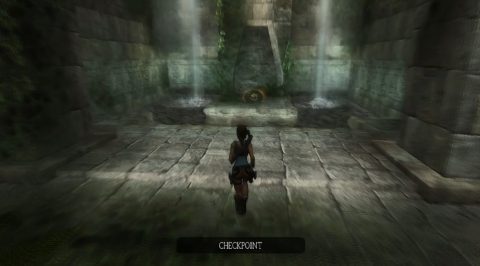 Swim through the tunnel and then pull up out of the water. Climb up the wooden pole and then jump across to the ledge. Jump up the two handholds and then left to the thin window. Jump left again to land on top of the wooden pole. Jump to the next handhold and up again. Jump to the left to land at the top exit.

From here run along the side of the walkway for a Small Medipak. Come back and climb up the stone ledge. Run along the top path and then make your way around the walkways as they curve around. You’ll need to jump the gaps between each one. 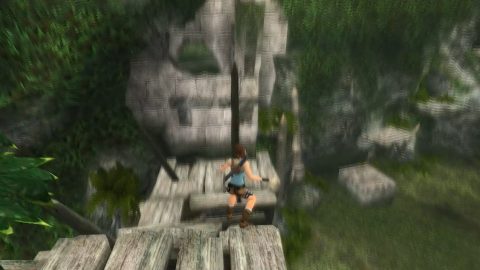 From here grab the Small Medipak and follow the path to the right. Turn right again before the next stone ledge and drop down to the green valley. Do a loop around the valley to pick up any loot you can find.

When you’re done climb back up to the cave entrance. Climb up the two stone ledges to the right and cross the broken bridge. On the other side grab the Large Medipak.

Grab onto the handhold just to the left of the bridge and traverse across to the left. Jump, to the left, up and back. Finally jump up to the highest ledge. From here do a double-jump (tap jump twice) over the small stream. 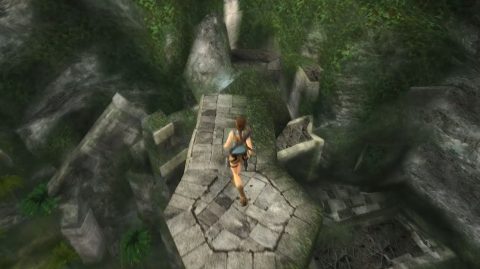 If you do a single jump she’ll try to land on the ramp and slide down. From here jump across to the ledge on the wall opposite and drop down for Artifact #2.

Back to the Mechanism

Climb over the small ledge and drop down on the other side. You’ll be back on this side of the bridge. Grab the handhold again and make your way up to the top. This time do a single jump to land on the ramp.

Follow the passage around and veer to the left so you can slide down the stone ramp. Jump across to the handhold and backwards to another hold. Drop down and traverse around to the right. Jump backwards to complete this section.

From here run back through the cave and climb up the wooden pole. Jump over to the ramp and onto the next pole. Jump through the window and slide down.

Make your way back through the tunnel to the large mechanism. Dive down into the water below and climb up the ladder.

Make your way up to the second wooden platform. Grab the handhold to the right of the Switch, traverse around to the right, up and then jump back to the higher platform. Wait for the spinning platform to flatten then make your way across. 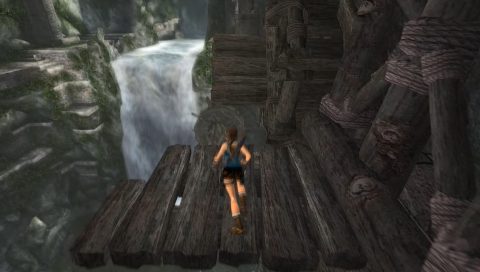 Place the third Cog in the slot and pull the Switch to activate the machine. The giant stone wall will lower to block the river and reveal the exit.

Dive down to land in the water and climb back up to the broken bridge. Dive into the water and swim upstream. On the right side you’ll notice an underwater passage. Swim through and pull up to find Relic #1 (Kero Mug).

Dive into the water and make your way down to the bottom. You’ll need to pull up just before the stone wall and then dive into the lower pool. Head through the secret entrance behind the waterfall to complete the level.