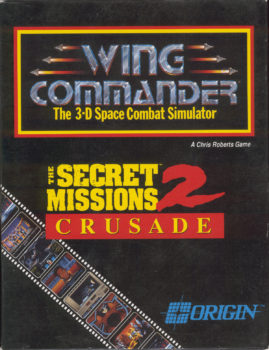 Wing Commander: The Secret Missions 2: Crusade is the second add-on for Wing Commander and features a tough campaign centered around an intelligent bird-like lifeform, the Firekkans. The Firekkans are planning to join the Terran Confederation but the Kilrathi have other ideas. A massive Kilrathi fleet is heading for Firekkan space so you’ll need to stay on your toes for this campaign.

The Tiger’s Claw has been sent to Firekka to act as an honour guard for the new Firekkans and to welcome them to the Confederation. Crusade includes new Kilrathi pilots called Drakhai. They fly the regular ships but have tougher shields. There’s a few new Kilrathis ships including the superfighter called the Hriss and a carrier called the Snakeir.

If you fail the objectives in any of the systems you’ll be taken to the Enslaved series. This is exactly the same as the Charon series except you’ll get the losing ending where the Firakka are enslaved by the Kilrathi.