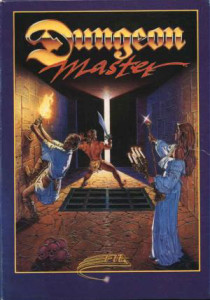 Dungeon Master is one of the greatest dungeon crawlers ever and was released by FTL Games back in 1987 for the Atari ST. Due to its popularity it was ported to other platforms including DOS, SNES, Amiga and Apple.

Dungeon Master became one of the best selling games of all time and it was certainly one of my favorites growing up.

Luckily we can still play this great game today with programs such as Dos Box and RTC. Find out how to download Dungeon Master here.

Two years after Dungeon Master was released the expansion, Chaos Strikes Back became available. It included more of the same dungeon crawling goodness with more advanced heroes and new creatures to battle.

Dungeon Master includes a number of spells for your priests and wizards. It’s highly recommended that you level up all of your champions in the wizard and priest skills as you’ll need as much magic firepower as you can get later in the game.

Here’s a list of spells. Note that the first symbol you enter is the power symbol and relates to how powerful the spell will be. Press the symbol you want for your power level and then follow the symbols below to cast spells or create potions. For potions you will need an empty flask in your left or right hand. 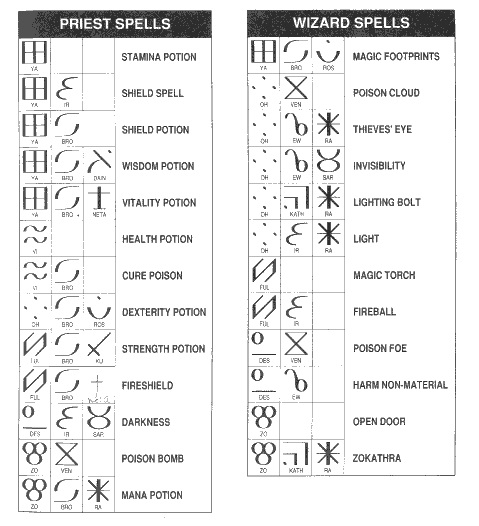 Level 2: Welcome – An easy level where you face your first foes. This is more of an introductory level with very easy puzzles and not too many monsters.

Level 3: Choose Your Fate – Collect the gold keys from 6 different chambers to progress through the level. You’ll need at least four gold keys to continue.

Level 4: Meet Your Doom – Finally a worthy opponent. Battle your way through the Magenta Worms to test your fighting ability.

Level 6: The Riddle Room – Only solving the riddle will grant access to this level.

Level 7: Tomb of the Firestaff – You’ll need to come here before the end but the final key for access to this level lies on level 12.

Level 8: The Void – Ghosts abound on this level. Have your Harm Non-Immaterial Being spell ready.

Level 9: Pain Rats – Hidden chambers, giant rats and fireball corridors. This is one tricky level so you’ll need to be prepared.

Level 10: Zooom – Wizard’s Eyes and Giant Scorpions thwart your progress on this level. You’ll also find the magnifier which you’ll need for the next level.

Level 11: The Clockwise Room – Make it past the puzzles to find a few nice weapons.

Level 12: Oitus and Armour – Things start to heat up on this level. You’ll find the Master Key protected by an almost impenetrable Stone Golem.

Level 13: Lord Chaos – This is the final level of the game. After finding the Power Gem on level 14 head up here to face Lord Chaos.

Dungeon Master was originally developed and published for the Atari ST by FTL Games. It was so successful that it was soon ported to other platforms including the SNES, PC, Amiga and Apple.

FTL Games unfortunately didn’t develop many games but the few they did develop sold really well. Two years after the original Dungeon Master they released an expansion called Dungeon Master: Chaos Strikes Back. The final game in the series is Dungeon Master 2: The Legend of Skullkeep.