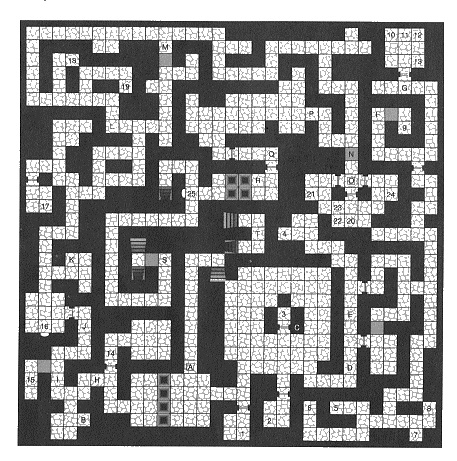 Monsters abound in this level and there’s two keys, the RA Key and Master Key, you MUST find before heading back up to level 7. As you head down the corridor you’ll step on pressure plate A. This will open the almost invisible pits in the hall. Press the plate again to close them.

Press the button at B to open the door C and get the Topaz Key. The button at K will open the door in the far north east at G. Inside you’ll find the Skeleton Key for this level, a Helm of Darc and other items.

Press the button at P to open the section N. The pressure plate at D is a trap. As soon as you step off it all three doors will open releasing the Oitus within. Items 20 to 24 lie withing so it might be worthwhile going for it.

The Animated Armour has the key for the door at J. Inside this door is the last RA Key you need for access to Level 7. Don’t go back until you have the Master Key located at 25, just past the revolving pits.

Use the Skeleton Key at S to open the central stairway and head back to Level 7: Tomb of the Firestaff.

If you  have the Firestaff already you’ll need to find the Power Gem on Level 14: The Red Dragon.