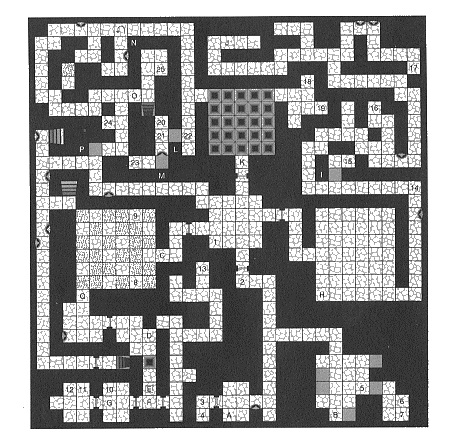 There are plenty of fountains on this level so make sure you fill up your flasks before going further as water is scarce in the deeper levels.

As you continue down the first hall you’ll head into the Treasure Stores. This area is divided into four sections with doors on each side of the room. Tackle one door at a time and you should be OK.

East Door – To the east you’ll find the Staff of Claws. Use this to attack the Coutls and they’ll run away, making it easier to hit them from behind. Press the secret button at H to allow you to proceed further in the large room.

South Door – A Swamp Slime resides behind this door. Watch out for its poison missile attack which can devastate your party. Apart from that it should be easy to take out.

West Door – Behind  the west door is the tricky teleportation room. If you can get through it you’ll be rewarded with poison darts, a helmet and a few other knick-knacks. 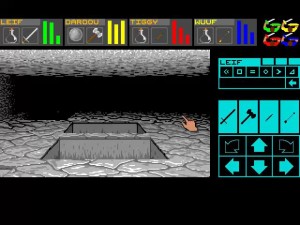 North Door – The north door houses the pit room. I found this easier than the teleportation room.  A few Couatls are here so you may want the Staff of Claws behind the east door before venturing here.

A secret button here will open the path back to the stairs at the beginning of the level and also to the second set of stairs leading down in the south west that will bring you to the main part of Level 6 – The Riddle Room.