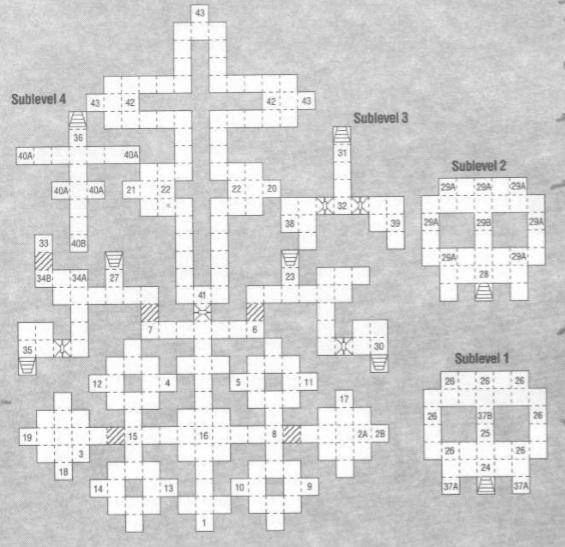 The Temple of Lathander has been desecrated. You will need to repair the temple and bring it back to its former glory. Initially there are no enemies on this level but gradually Living Mucks and Shades will appear as you explore.

The Shades have a powerful attack and are 60% resistant to magic but apart from that they’re fairly easy to kill. The Mucks can destroy metal weapons and are immune to acid, lightning and poison. Fire spells do half damage so attack with cold-based spells if possible.

2A-B) At 2A you’ll find the Broken Arm of a statue. Place it back on the statue at 2B and Lathander will appear. From now on your party will be healed whenever you touch one of the statues.

3) Longsword +4 and four Bags of Incense.

4) Place a Gold Cup on the altar and the north wall will disappear. The gold cup can be found at location 18.

5) Burn some incense in the censer and the wall at location 6 disappears.

6) This wall disappears when you burn incense in the censer at location 5.

7) Place a Gold Cup on the altar and the north wall will disappear.

8) The wall to the east disappears when you place a Ration on the altar at 9.

9) Place a Ration on the altar and the wall to the east of 8 will disappear.

10) The plaque on the west wall reads “Famine is driven back by the generous.”

11) The plaque on the east wall reads “Pestilence is subdued with a waft of sweet air.”

12) The plaque on the west wall reads “Drought is dispelled with a drink of clear water.”

13) The plaque on the east wall reads “War is averted by forsaking the sword.”

14) Place any sword on the altar and the wall to the west of location 15 will disappear.

15) The west wall disappears when you place any sword on the alter at location 14.

16) The Holy Fountain of Lathander. When you repair the fountain by adding it’s spout you’ll be able to touch a fountain and gain the Prayer spell.

17) The Spout for the Holy Fountain at location 16.

20) The stairs here first lead down to the Pit of Despair. If you go down you’ll be trapped there forever. When you place Holy Symbols on the altars at 43 in place of the cursed symbols the stairs will change direction and lead up to the Temple of Lathander Level 2 location 1.

21) Same as above. Once the Holy Symbols have been replaced the stairs will lead up to Temple of Lathander Level 2 location 2.

22) The plaque on the wall reads “Into the pit of despair you are cast, while the curse of night still lasts.”

25) Here you’ll find Tabitha, a Paladin. She’s willing to help the party if you want her. She’s level 10, has the highest Strength of all the NPCs and starts with 92 hit points.

26) Tombs of the heroes of Myth Drannor.

29A-B) Tombs to the heroes of Myth Drannor. All of the tombs are open. Close them all and a Holy Symbol will appear at 29B.

32) Use the Fire Key in the lock to open the doors to the east and west.

36) A plaque on the wall says “The Morninglords shield you from the night.” The stairs lead up to location 35.

41) The plaque says “Surely goodness shall replace the evil which lurks in our midst.”

42) The plaque says “The virtuous light of dawn drives back the night.”

43) Cursed Holy Symbols rest on each of the three altars. When you replace them with Holy Symbols the stairs going down to the Pit of Despair at locations 20 and 21 will go up to the Temple of Lathander Level 2 instead.