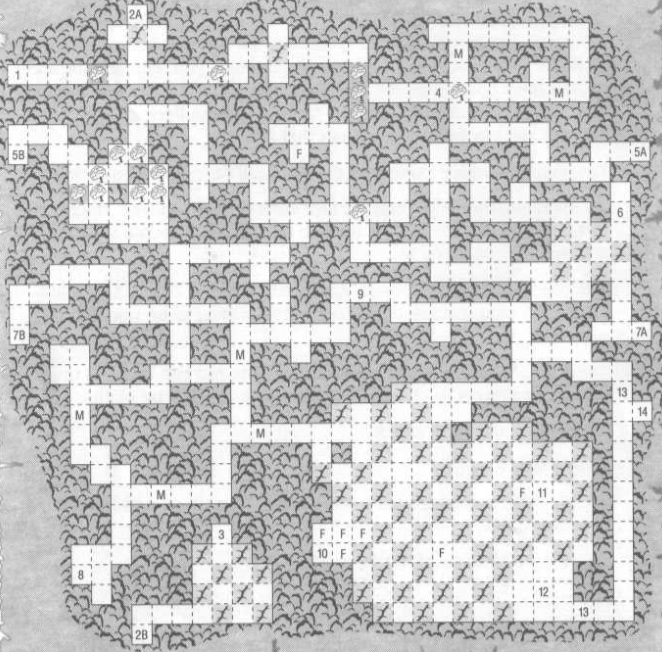 To make it to the city of Myth Drannor you must first navigate through the Forest Trail. The path to the Guildhall Quarters is in the south-west corner of the forest. Along the forest trail you’ll encounter Minotaurs and Feyrs. The Minotaurs are fairly tough but can fall to both melee and magic attacks. Feyrs are far more tricky. They’re invisible until they attack so cast True Seeing so you can spot them. They’re also partially resistant to magic and have a lot of hit points. Use multiple melee attacks to take them down.

1) Path back to Burial Glen.

2A-B) The trail wraps around form north to south here.

3) An Everburning Torch. Wave this in front of movable trees to clear the path. You can also use the Medallion of Friendship from the Warriors Tomb Level 2.

4) You’ll find Delmair Rallyhorn waiting here. He’s an 11th level Ranger with high Strength and Dexterity. Delmair is a were-tiger, meaning he’ll turn into a tiger when damaged. This is generally a good thing as he has two powerful claw attacks while in tiger form.

5A-B) The trail wraps around from east to west in this location.

7A-B) The trail wraps around the map east to west in this location.

10) A Ring of Wizardry which allows Mages to cast extra spells, a Wand of Magic Missiles, Gauntlets of Fire Giant Strength, Leather Armor +3 and Thieves’ Tools.

13) Once you pass the Sage’s test these forest paths will be opened.

14) Path to the Guildhall Quarter Ruins.