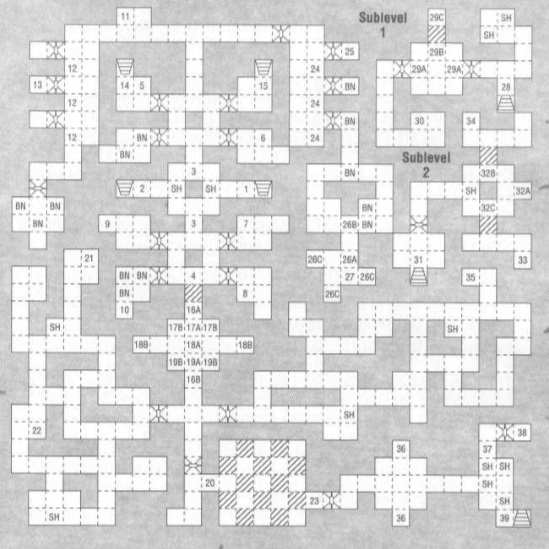 The statues of Lathander heal the party when touched, making this level much easier than you would expect. There’s a few puzzles to get through before finding the Morning’s Light talisman and the stairs up to level 3.

1) Stairs down to Temple of Lathander Level 1 location 20.

2) Stairs down to Temple of Lathander Level 1 location 21.

4) Pressing the Secret Button on the north wall makes the south wall disappear.

7) Mage Scroll of Stone to Flesh and two Bags of Incense.

9) By the north wall you’ll find a censer. Burn some Incense in it and the party will be buffed with the Bless Spell.

10) A Statue of Lathander. Touching it will heal the party.

12) Each of these three Levers opens the door to the west.

13) A Parchment with a poem about the talisman called Morning’s Light.

17A-B) The first time you step on the invisible Pressure Plate at 17A a Lightning Bolt will shoot towards you from 17B.

18A-B) The first time you step on the invisible Pressure Plate at 18A a Lightning Bolt will shoot towards you from 18B.

19A-B) The first time you step on the invisible Pressure Plate at 19A a Lightning Bolt will shoot towards you from 19B.

20) The plaque on the wall reads “Blessed are the pure of hert for they shall find the way.” The walls in the room to the east of this location shift when you move and it’s filled with invisible pressure plates that spin the party around. To get through the maze from location 20 go East, North, North, East, East, South, East, East, South, South, East. Alternatively cast a Bless spell while you’re in the room and all the walls will stay still, making it easier to find the exit on the eastern side.

22) Gauntlets of Hill Giant Strength, two Arrows +3 and a Rock.

24) The Levers on the wall open the doors to the east.

26A-C) When you step on 26A a wall appears and blocks your exit at 26B. Placing an item on each of the Pressure Plates at 26C removes the wall at 26B. Whenever you weight one of the plates at 26C a Fireball shoots at you from behind.

28) Stairs up to Temple of Lathander Level 2 location 14.

29A-C) When you step on the Pressure Plates in this room the door nearest to you closes. Weigh down both plates and a Secret Button appears. Press it to remove the wall at 29C. Pull the Lever and the doors will open.

30) Three Shambling Mounds. One of them drops a Gold Key when killed.

31) Stairs up to Temple of Lathander Level 2 location 15.

32A-C) There are Secret Buttons in the north and south wall at 32A. Pressing them opens the walls at 32B and 32C.

36) A Statue of Lathander. Touch the statue to heal the party.

38) The Morning’s Light talisman can be found in the niche. When you find it Lathander visits you and gives you a Bright Blade called Dhauzimmer. It slays undead with a single hit but otherwise works as a Two-handed Sword +5.

39) Stairs up to Temple of Lathander Level 3 location 1.