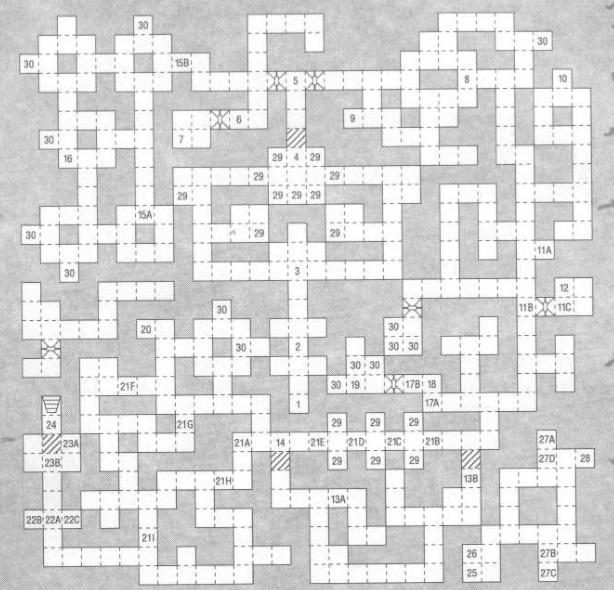 When you first enter this level if you’re holding onto the Ring of Trobriand the Scaladars won’t attack you. Try to kill as many of the Scaladars as you can before giving up the ring to progress forwards. Scaladars take very little damage from edged weapons and are completely resistant to lightning and cold based spells and partially resistant to other spells. Steel Shadows also wander these corridors but they have few hit points and can’t do much damage.

2) A group of four Steel Shadows.

3) A Sprite called Bug is here and as a powerful Mage can make a good addition to your party.

5) Pulling this tassel will open the doors to the east and west.

6) Pressing the Button will open the door to the west.

8) Pulling on this tassel will transport the party to location 25.

9) The teleporter at location 26 takes the party here.

11A-C) Pulling the tassel at 11A opens the door at 11B at which point three Steel Shadows will attack from 11C.

12) A Ring of Sustenance, Wand of Flesh to Stone and two Potions of Invisibility.

14) The Secret Button opens a passage to the south.

19) A Spellbook, four Rocks +4, an Apple and three Potions of Poison.

22A-C) When you step at 22A all of the metal items in your inventory will be stolen and two Steel Shadows will attack. When you’ve killed them you’ll be able to get your items back.

23A-B) When you pull the tassles at 23A the wall at 23B will disappear, revealing the stairs up at location 24.

25) You’ll land here when you pull the tassles at location 8.

26) Stepping into this teleporter takes you location 9.

28) A Dagger +4 named “Ocnor” is in the niche. When you take it out a group of Steel Shadows appear behind you.