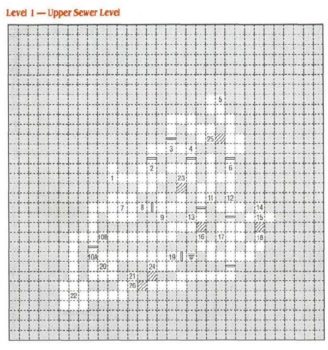 The first level of the sewers is inhabited by Kobolds and Giant Leeches. The Kobolds are very weak and only have a melee attack but sometimes walk around in packs. The Leeches are slightly tougher and slower but also can only attack from close range.

1) Entrance to the sewers. It will cave in behind you as you enter, blocking your escape. There are 2 Rocks here that may come in handy as early game weapons.

2) The Lever on the north wall opens this door. There are Bones of a thief, Tod Uphill. Bring them along if you want to resurrect him later. You can also find his Lockpicks on the floor.

4) Runes: If you have a Gnome in the party it will be translated as “Entrance”.

5) Rations and a patrol of 4 Kobolds.

6) A Pressure Plate here opens the door. A Button opens it from the other side.

7) A pack of Kobolds with a Detect Magic Scroll and 2 Rations in the south-west corner of the room.

8) A Pressure Plate which opens and closes the door.

9) The Button on the west wall opens and closes the door.

13) Lever that opens and closes the north door.

16) Secret brick in the west wall that opens a secret passage to the north.

18) Secret brick on east wall that opens a secret passage to the north.

19) Arrow. Putting weight on the Pressure Plate and pressing the Button on the east wall opens the door. Behind it is the ladder down to Level 2.

21) Two scrolls on the shelf in the north wall, Armor spell and a Bless spell.