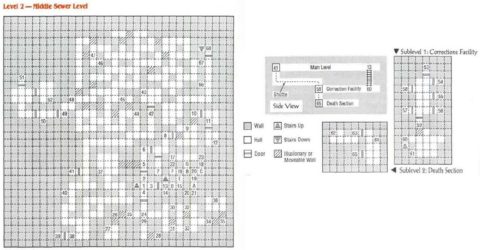 Level 2 of the Sewers is filled with Undead. They can be turned by a Cleric if they have a Holy Symbol in one of their hands. Skeletons attack quickly and take half damage from piercing and slashing weapons. Zombies attack more slowly. Both Skeletons and Zombies can group together into a party of four creatures.

This area contains rotating floors tiles and teleports, making the level much more difficult than it needs to be. You’ll need to keep an eye on the compass to make sure you’re not getting turned around and preferablly use an automap to see when you get teleported from one section to another.

1) Ladder up and a Silver Key on the floor.

2-4) Doors leading north, east and south. A Silver Key is needed to open each door.

5) Once you’ve collected the 3 Silver Keys from each of the above doors a passage will open up here leading west.

6) Press Button to open door but it will get stuck. Click on door to force it the rest of the way.

7) Door can only be forced open. A Skeleton guards a Potion of Vitality.

8) Throw a Dagger, Dart or Rock through the gate to hit the Button on the other side. A wall will disappear to reveal location #9.

9) Push Button to open a secret passage to the north.

10) This door must be forced open.

11) This door must be forced open.

12) On the shelf you’ll find Rations, a Silver Key and a Potion of Giant Strength.

14) The Lever closes and opens pit D to the east.

15) Throw an item over the pit to the north to land on the pressure plate #16. This closes the pit so you can safely walk across it.

16) Pressure Plate that closes the pit E to the south.

17) The shelf contains a Silver Key and Rations.

19) The Button here open pit B and closes Pit A. Pushing it again will do the reverse.

24) Rotates the party 90 degrees to the right. Keep an eye on the compass.

26) Mage Scroll of Shield. The walls to the south and east are illusions.

27) Two Zombies and a dagger inscribed on the west wall.

28) Stepping on the Pressure Plate causes an illusory wall to appear on the west wall. Simply step through it.

30) Teleport to #33 and spins party around 180 degrees. You can go through the illusary walls to avoid being teleported.

35) Illusory walls to the north and west.

Once you have picked up the items from the shelves where the Silver Keys are located return to #5 and head west.

37) A Stone Dagger lies in the south-west corner. It’s the first Portal Key used in the lower levels.

38) Throw a Dagger, Dart or Rock through the gate to land on the Pressure Plate. The gate will open.

39) Potion of Extra Healing and Rations.

40) The first R.A.T.S (Rapid Access Teleport System) which teleports your party to location #66.

41) This room is a shuttle, or lift, between the Main Level and the 2 Sub levels. To operate the lift press the Button on the west wall. Looking at the south wall will tell you which level you are on, Main Level, Correction Facility or Death Section.

42) Use a Silver Key to open the door to the north.

43) Pair of Leather Boots and Rations.

49) This door can only be forced open.

50) Place an item on the Pressure Plate to open the door.

51) Force open the door and kill the Skeletons. Do NOT press the Button. Pressing it changes many of the walls in the northern part of this level. The Lever here opens the door at #52.

52) Two Zombies and a Potion of Healing.

54) Cell with two Skeletons and a Bow.

56) Two Skeletons and a Mage Scroll of Invisibility.

58) Shuttle between the Main Level, Corrections Facility and Death Section.

59) Two Skeletons. Pressing the secret brick will open the wall to the south.

63) This door must be forced open.

65) Shuttle between Main Level and Sub-Levels.

67) Use the Gold Key to open the door to the north.

Letters A-G) Pits. Some of them can be opened and closed with Pressure Plates or Buttons.