The Clockwork Tower has a mechanized theme with conveyor belts, wind up rats and gears to avoid. The boss is the Tinker Knight. He’s weak at first but once he gets inside his robot monster the battle will get a little more difficult. Along the way you’ll find three Music Sheets and a new relic, the Mobile Gear.

The first secret chest can be found just after dodging the large yellow gears. Jump up to the orange conveyor on the right and break the wall climb up the ladder to a room with the chest. Bounce across the large gear to the chest. Inside you’ll find a bunch of gems. 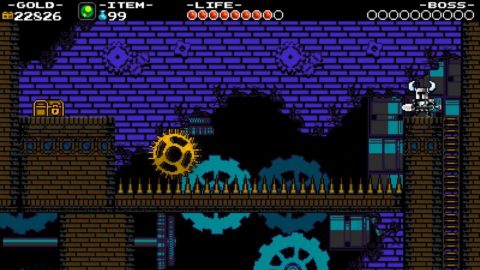 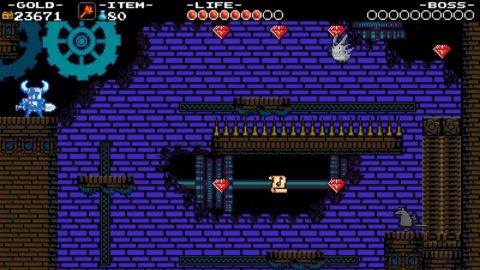 Make your way up the ladders to the red knight. Take him out and then break the wall to the left. Jump over the ledges and conveyor belts to the chest where Chester is hiding. 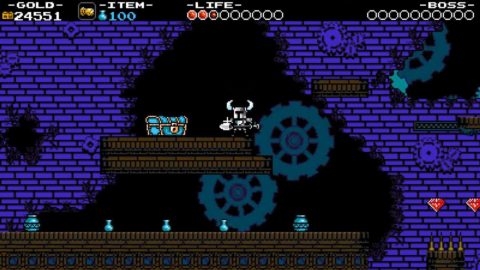 Chester will sell you a Mobile Gear for 3000 Gold. When you use it quickly step on top of the gear and it will carry you along the way you were face. It can ride over spikes and jump small gaps.

Make your way to the right to the second Checkpoint. Jump onto the pipes and then up the ladder to a room with the second Music Sheet. You’ll need to use the Mobile Gear to get across the spikes. 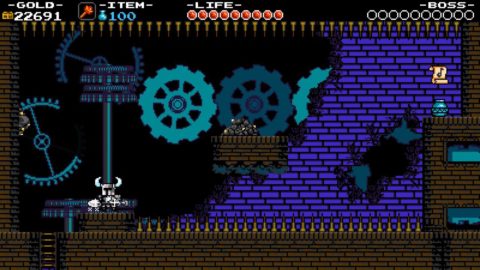 Drop back down and head to the right to the moving platform. Take out the enemies along the way and head up to the third Checkpoint. Climb the ladder and go to the left to the room with dropping gears. Head up the next ladder to the third Music Sheet. 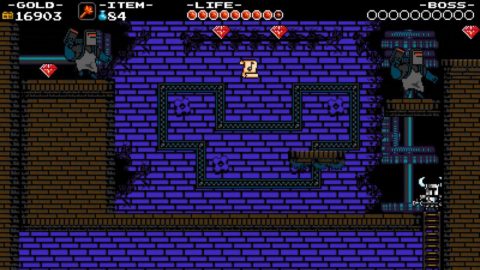 Go to the right to the tower section of this level. The screen will slowly move up and you’ll need to climb the tower. You should have enough time to make it up easily. The only danger is falling.

Continue to the right, grab a chicken from the wall to the right and hit the lever to lower the stairs to the fourth Checkpoint. Just to the right you’ll find the Tinker Knight. 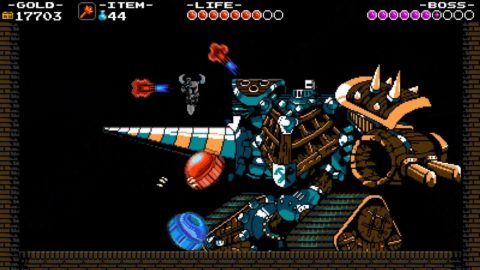 The Tinker Knight is very weak when you first encounter him. He’ll throw spanners at you but they’re easy to dodge. Whack him with your spade or do downward strikes until he falls. The floor will give way and you’ll both drop down to a basement level. The Tinker Knight will land in a monstrous robot. Now the real fight begins.

The only way to hurt the Tinker Knight is to downward strike on his head. You’ll need to climb up the robot to reach him. Use the missiles as platforms and jump up to the drill. From there jump across to the right. You can stand on the platform where the three missiles are fired but you’ll need to keep jumping to avoid the missiles. Jump from there onto the Tinker Knight and get in as many strikes as you can.

You’ll only need to dodge the right missile. If you get knocked back down you’ll need to use the bombs or torpedoes to climb back up. Occasionally the robot will move rapidly to the left and back again. It can be hard to stay on top of the robot when he does this. Keep on downward striking on the Tinker Knight until he falls for the second and final time.