A large wooden ship has been stranded in the icy mountains. The slippery ice makes navigating this area much more difficult. There’s plenty of hidden treasure, including 2 Music Sheets, and one of the final relics, the War Horn. 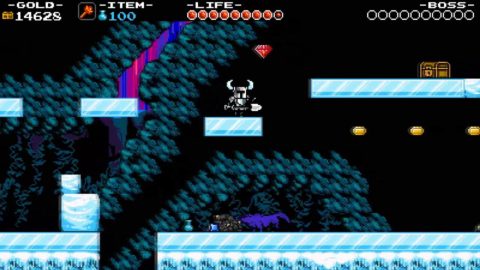 Continue to the right and take out the Vikings along the way. Use the Flare Wand or jump over their spears to get close enough to take them out with your shovel. The fishing spot here has a Golden Trout for 350 Gold.

When you come to the wooden ship break the wooden wall up the top for another chest with gems. Just watch out for the bomb. The first Checkpoint is just to the right. Make your way up and around the ship. There’s only one path to take. Once you come to the creatures with large horse head shields jump on one of them and break the wall up the top to the left. This takes you to secret room with another chest filled with gems. 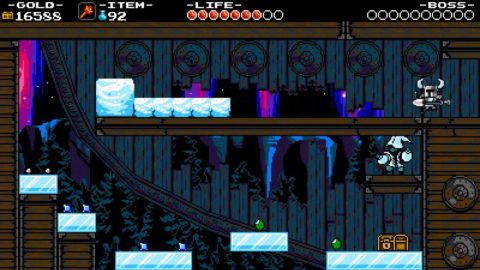 Head back to the right and you’ll come across a blue ice statue. When you stand on one side of it and hit it with your shovel it will slide across and leave a rainbow bridge behind it. You can use it to traverse across the level. Jump up to make it move up, stand on it to move it down and hit it to the left or right to move it either way. You’ll need to use a few of these statues to make it to the end of the level.

Just past the first two ice statues is a Viking jumping up and down. Kill him and then break the wall to the right twice for an Apple. Continue to the right for the second Checkpoint. Below it is a secret with a Chicken. 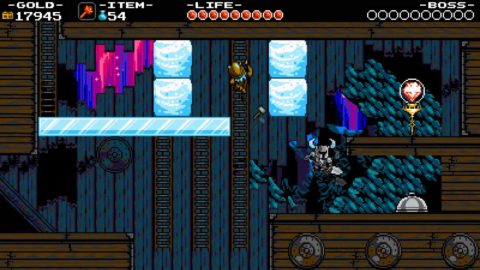 Head up the ladder, break the secret wall to the left and make it over the spike for the Chester chest. This time he’ll sell you a War Horn which kills all nearby enemies but uses up a lot of magic power. 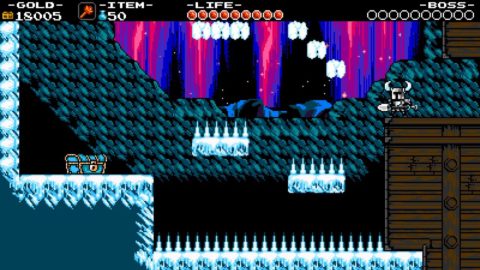 Make your way up the ladders to the very top. Kill the Mage standing at the top left of the screen and walk to the left for the first Music Sheet. Be very careful of the slippery ledges when trying to pick up the sheet. 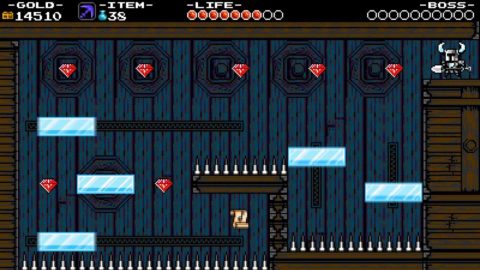 Head back to the right and hit the snow to drop it on the spikes so you can make it across. Keep the little dragon bird alive. You’ll need to bounce off him so you can get onto the ice block and over to the second Music Sheet. 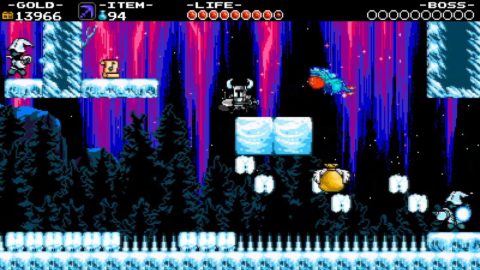 Continue to the right for the fourth and final Checkpoint and get ready for the boss fight. Break the wall just above and to the left of the checkpoint for a final Chicken. 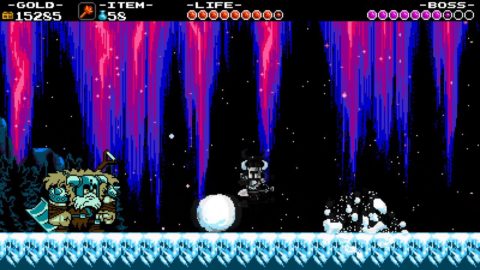 The Polar Knight is a large knight and one of the members of The Order of No Quarter. He used to be an old friend of Shovel Knight but is now a villain. The Polar Knight attacks in two different phases. If you try to bounce on him from above he’ll hold his shovel above his head to block your attack.

For the first phase he’ll dig up snowballs and fling them at you. You’ll need to knock them back or bounce on them to break them apart. For the second phase the Polar Knight will shovel away the snow, revealing one-hit kill spikes underneath. This makes the battle much more dangerous and it’s worthwhile taking the Chalice of Boldness to make you invulnerable to spikes for 10 seconds. You can then continue attacking him even on the spikes and hopefully finish him off. After a while the Polar Knight will send snow back onto the floor, covering the spikes once more.