The Explodatorium is the playground of the Plague Knight. You’ll need to quickly make your way past burners, avoid exploding rats and dodge potion bombs. There are two Music Sheets to find as well as a new artifact, the Alchemy Coin.

Make your way to the right, past the burners, and down to an area with exploding rats. Knock the first rat off the blocks, then jump up the blocks and hit the wall to the left for a secret chest with gems. 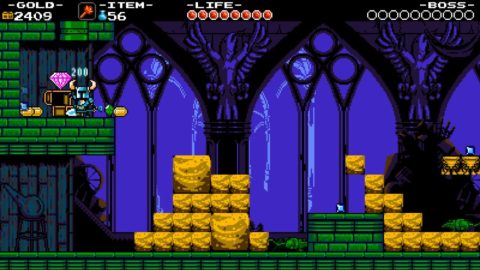 Continue to the right, past the bats dropping exploding potions to a fishing spot where you can catch a gem trout. The next screen to the right has the first checkpoint. Let the rats explode and break the walls to the right. Make sure the rat on the ledge to the right explodes near the right side so that it breaks the wall above it, revealing a ladder. Climb up the ladder and then jump across the moving platforms to a chest with the first Music Sheet. 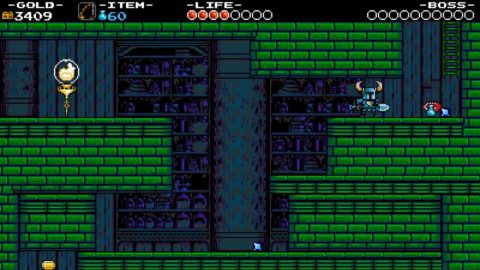 Head back down and then carefully make your way to the right, past the barrels with lids that pop up and down again. The spikes in the roof above will cause instant death if you hit them. So avoid them or use the Phase Locket to make yourself invincible for a few seconds. 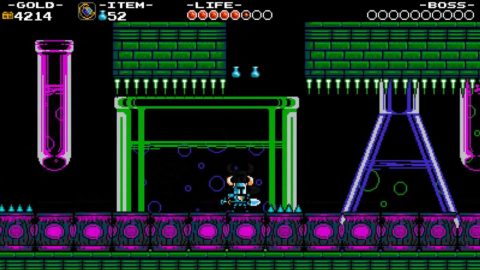 Just to the right make sure you bounce off the ghosts to make it to the top ledge. Break the blocks to the right for a secret area. 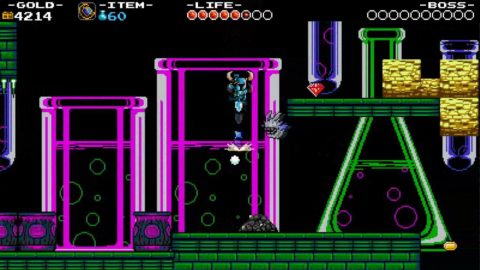 Defeat the Green Knight continue to the right. Open the chest to find Chester. He wants to sell you the Alchemy Coin. When you use it the coin rolls along the ground, destroying all enemies it comes in contact with. 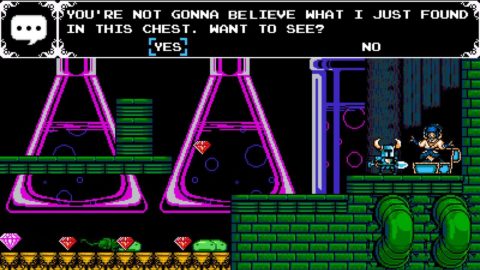 Roll the Alchemy Coin along the ground to the left and follow along behind it. Head back to the previous screen and drop down.

Pick up the Chicken for a health boost and continue down again for the next Checkpoint. Head to the right for the slimes and bat that drops potions. Try to keep the floor in tact as much as possible. The exploding potions will destroy some of the platforms but keep the ones at the end in tact. Downward strike off the bat to make it to the top ledge. 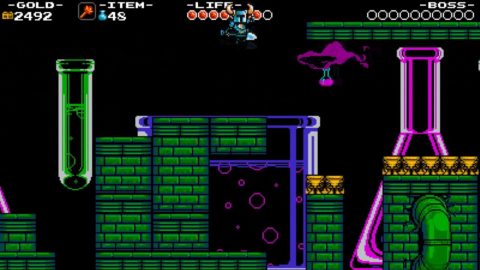 Run along the top ledge and drop down for the second Music Sheet. Break the blocks to find another Chicken, get the next Checkpoint and prepare for a fight with the mini-boss called the Alchemeister. 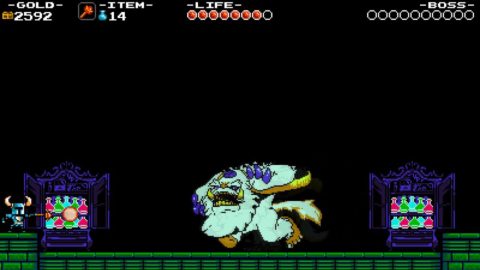 This boss will fling exploding potions at you and after a while turn into a yeti that runs back and forth. The best way to stay safe is to stay in the left corner and throw fireballs at him. When he turns into a yeti and runs towards you jump on top of him. He has 23 hit points in total and deals 2 damage at a time.

Once he’s been defeated continue to the right for the next Checkpoint and make your way across the burners, defeating or avoiding another Green Knight along the way.

At the end of this section hit the wall just be the bottom of the ladder to reveal a secret. You’ll need to avoid the burners at the top and bottom to make it to the chest. 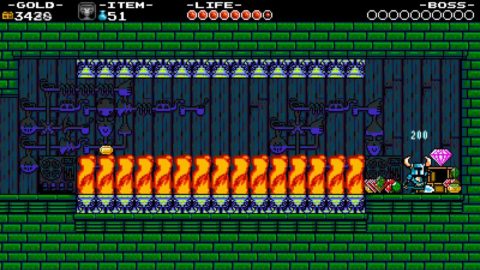 Head back and climb up the ladder. Avoid the next section of burners and ghosts as you climb up the ladders to the next Checkpoint. The Slime Knights in the next section shouldn’t cause you much trouble. Continue to the right for the last Checkpoint. Break the wall just to the left of the checkpoint for some food and a health boost, then drop down to the right for the final boss.

The Plague Knight likes to jump around the arena and throw exploding potions at you. These potions break the floor, making it uneven and a little more chaotic. The explosions will also cause green fire to race across the floor. After a while the Plague Knight will summon flasks filled with a purple substance. They will explode if hit with a potion.

The best tactic is to get up close to the Plague Knight and bash him as quickly as possible. Sometimes you can jump on his head and get in multiple downward strikes. If you’re taking too much damage use a Chalice with the Ichor of Boldness or Renewel, for invulnerability or renewed health. Once the Plague Knight is defeated you’ll be back at your campfire.