The Iron Whale is a sub that patrols the southern coast and is home to the Treasure Knight. Half of this level takes place under water but Shovel Knight has no trouble breathing under water. On this level you’ll find the Throwing Anchor relic and 2 Music Sheets.

When you begin the level drop down through the bubbles to the water below. The water will slow your fall and allow you to jump higher. Continue down and then head across to the right. For the first secret you’ll need to hit the shell of the little sea creature to break the blocks in the roof above. 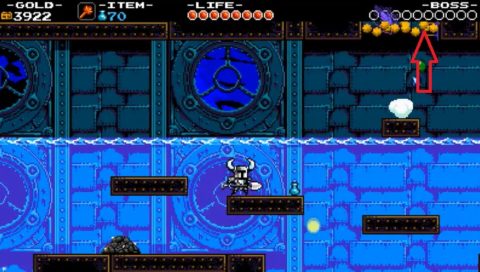 Jump up to the ladder, avoid the little creatures and make your way to the first chest filled with gems. Continue down to the first Checkpoint. Break the wall just underneath it and head to the secret area to the left. Bounce across the little sea creatures to the chest on the other side for more gems. 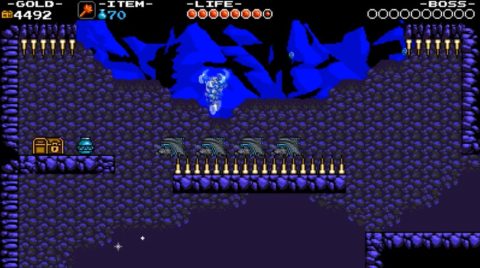 Make your way to the right, killing or avoiding the Gulper Mage along the way. These creatures float at the top of the screen and can summon a shield of green orbs which they then fling towards you.

You’ll come across the pink sea serpents next. You can only kill them by hitting them on the head. Go all the way to the right and look for the spot on the wall marking a secret. Hit the wall and go through to the right. Jump across the bubbles to the chest with the first Music Sheet. When you jump back you’ll need to bounce across the sea serpents. 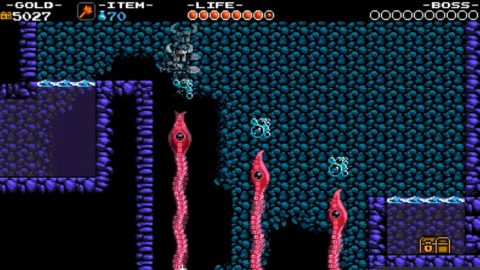 Drop down and make your way through the sea serpent area to the next Checkpoint. Drop down to the sea floor and open the chest. It’s a trap! Teethalon will awaken when you open the chest and start chasing you. It will shoot angler fish at you that you’ll need to dodge as well. When Teethalon stops you’ll have a chance to hit the glowing chest. This is the only place that damages the creature. When it charges at you either bounce over it or use the Phase Locket to phase through it. After a few hits to the blue chest Teethalon will be defeated. 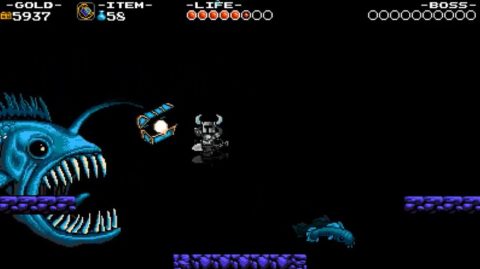 The chest will float to the ground. Open it to find Chester. This time he’ll sell you the Throwing Anchor for 3,000 Gold. Continue right to the next checkpoint and make your way up the ladder. Climb the ladder to the top and then smash the wall to the right for another secret passage. Bounce across the bubbles to a chest with the second Music Sheet. You’ll need to defeat a Gulper Mage along the way. 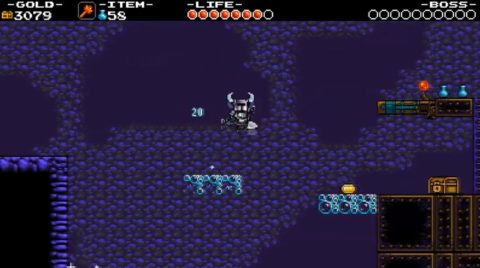 Go back, make your way across the ladders to the left and then go up into the submarine. Hit the levers to make the platforms shoot across the screen to get across the spikes. Continue to the purple knight and defeat him for another chest of gems. Head to the right for the next Checkpoint and the anchor section.

The anchors will drop when you get near them. Wait for them to start pulling back up and jump on the top of them. Make your way along the top of the anchors and then jump across to the bubble ledges. Leave the screen at the top right for a secret. You’ll need to fight a purple knight while avoiding the orbs from the creatures above. 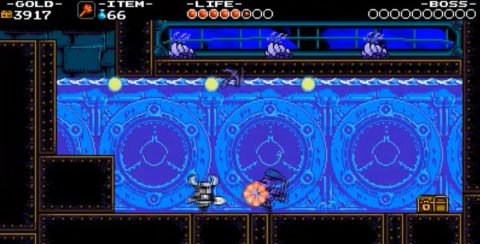 Go back and make your way down. Take the moving platform to the right for the last Checkpoint and the boss fight. 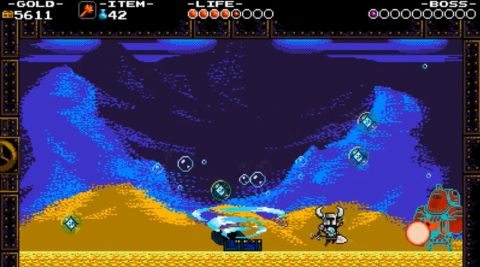 At some stage the Treasure Knight will throw a chest down in the middle of the arena. When it opens it sucks in everything around it. If you get trapped inside the Treasure Knight will hit you with his anchor and you’ll lose 4 hit points. The knight can also throw out caltrops that explode with an area of effect. He often combines this with the treasure chest making them very difficult to avoid.

Using the Flare Wand or Chaos Orb to hit the Treasure Knight from a distance makes this fight much easier. If you’re running low on health don’t be afraid to use a Chalice to renew your health or make you invulnerable for a little while.