This is the last mission of Dark Forces and it’s also the toughest. If you play on medium difficult there will be many Dark Troopers to take out.

Open the container door and get out. Either take the elevator down and pull the switch to raise up the walkway or just jump across to the other side. 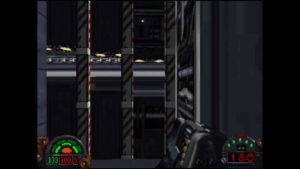 Go up the steps and drop down to face a Phase 1 Dark Trooper or two. On one side is a welding arm that will zap you if you get too close.

Jump into this dark room for a Revive! 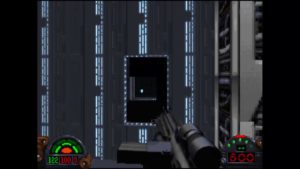 Or press the button and jump across to the main door. There are Dark Troopers flying around in this area so watch your back. Once you jump across you’ll be attacked by another Dark Trooper. There is a Shield Supercharge that makes this fight very easy. 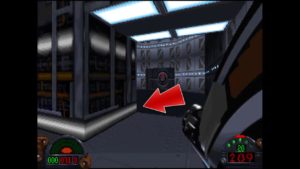 Continue forwards and up the elevator. Find the small path that leads to a hand button on the wall. This will move the staircase up so you can get up to the higher level.

Jump across to the small ledge in front of the closed door. 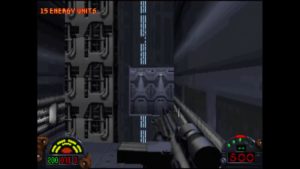 Head down the corridors until you come to a t-section. On the left is a closed red door. To the right you can crouch low under the wall. The red door will open when you set the first sequencer charge. Crouch down and follow the left tunnel. It will open out to the room for the first explosive. On the right is a button that exposes the location. You’ll need to shoot at it when the machinery moves out of the way.

Set the charge and go back to the red door. Take the elevator to a new location. Make your way across the walls that are lifting up very quickly. To the right is a secret location with an Extra Life. You’ll need to crouch down to get inside and then run past a compactor. It’s difficult to do without losing too much health to make it worthwhile. 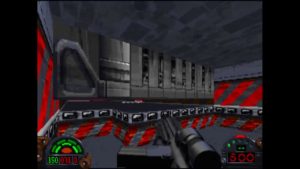 Now go back and across the moving walls. Jump across the ledges and set the second sequencer charge. 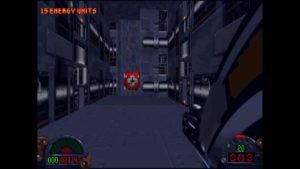 Go through the open red door to an escalator. Travel down the first one and then jump across to the other ledge on the right. Head through the door and take the elevator.

Walk down the corridor and through the red door on the right. You’ll come to a section with escalators. Take the escalator and duck under the triangle-shaped block. 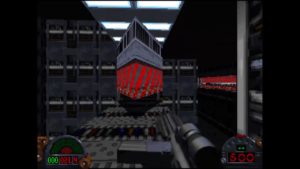 Take out the Stormtroopers and open this door for a secret with lots of Shield Units and Medpacs. 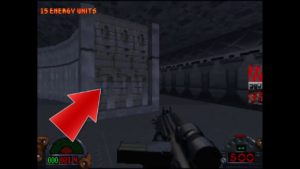 Head out and take the escalators. The trick here is to not fall off the edge. Keep taking the path where the escalator continues. You’ll need to jump over some low walls to avoid falling off. If you do fall off you’ll need to come back up and try again.

Duck down past the last few low walls and press the button at the end to turn off the escalators. Now just drop down the edge.

Go forwards into a room with five buttons and a strange line on the wall. You’ll need to press each of the buttons so the line matches up as in the pic below. Each button corresponds to a part of the line so it’s not really that hard. 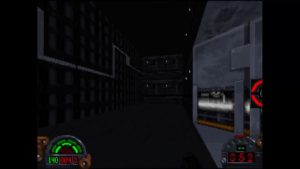 Head behind the wall, take the elevator down and kill the Dark Trooper guarding the third exchange coupling. Set the sequencer charge and go out the red door.

This will bring you to a large area with big doors. Drop down and open the doors. Dark Troopers will come running out so be prepared for a battle.

With all the doors open drop down to the area with the large red sign. General Mohc will appear wearing the Dark Trooper Exoskeleton. 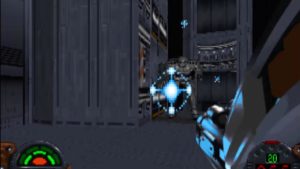 This is the last big battle of the game. Once he’s been killed a door at the back will open allowing you access to the shuttle hangar bay. Kill the last remaining officer and complete the mission.