The Imperial City is absolutely teeming with Stormtroopers and Imperial Guards. Don’t bother trying to shoot them all. Just head to the elevator in the south west and get out of this area. The other elevators will just take you down a level.

Take out the Stormtroopers up on the ledge here. 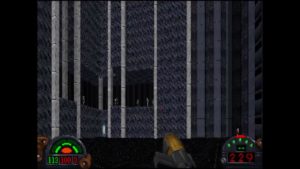 Then go up the stairs on the right side to get up. Follow it around to an elevator up and then open the next door.

Don’t step outside just yet. There are spotlights that you need to avoid. If you’re spotted the doors and windows will open and you’ll be shot out by a dozen Stormtroopers. 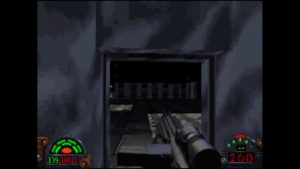 The Blue Key is to the far right. You’ll then need to jump over the gap to the left and open the Blue Door.

Open the door and take the lift down. It will stop 5 or 6 times and new Stormtroopers will shoot at you on each level.

On the lowest level open the door and head across to the next building. There are a ton of Imperial Officers here, stopping you from going in. Take them out and go inside.

The reception of the next building has four gun turrets. Two on the right and two on the left. You can shoot them down or make a dash for it.

Inside the main part of the building open the door with the red symbol on it. This will take you up a level. There is a door on the inside part of the ring that needs a Red Key. Take one of the smaller doors on the outside of the ring.

Come into this room and press the switch on the wall. 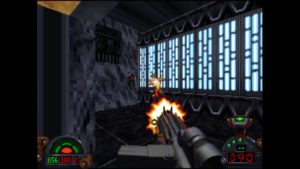 Crouch down and press the lever next to the brown block which will move it out a little. Now you can stand on the block and do a running jump to the small alcove. Follow it around, pull the lever and go out the other side.

Pick up the Red Key in the corner and also grab the Assault Cannon. Press the button to open the door which opens out directly in front of the Red Door. Go up the elevator and follow the path around.

Another elevator goes down and then another goes back up to finally take you to the top of a building. The room with the red symbol on it has a Dark Trooper inside. Kill it and pull the switch which reveals another door outside.

This elevator takes you down to the data core. 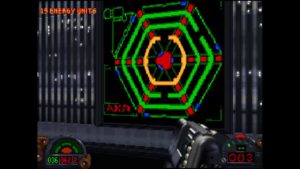 The diagram above shows you the three layers and where the entrances to each layer is. Basically there are six doors on each layer controlled by six switches around the outside. Each switch has three settings opening a door on one of the layers.

Go around and open all the outer layer doors.

Go to the central core, push the two switches and use the Nava Card. Grab the Data Tape and go through the large door behind you to get out of there.

Before Jan comes back you’ll be faced by none other than Boba Fett! He zooms around and shoots mortar shells at you! Do your best and once you’ve killed him Jan will come back to end the mission.