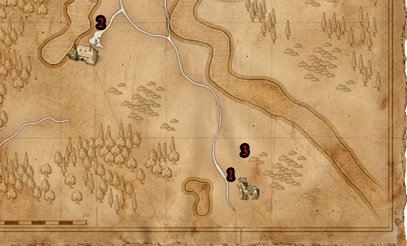 Small Problems is a side quest that is initiated once you speak to the mason, Harn, who’s trying to repair a bridge (#1) in Murky Waters. All the work he does on the bridge during the day is undone by these little creatures called Griggs.

Head over to the Healer, or Abigail, (#2) and ask her about the Griggs. She’ll tell you to recover a Cat Harness that an evil tribe of Griggs stole. You’ll find it in a Santon in the Crypt in the Fields. Bring it back to the Healer and she’ll instruct you to take it to the Santon (#3) by the bridge.

Place the Cat Harness in the Santon by the bridge to receive a Four-Leaf Clover. This symbolizes the friendship of the Griggs. Give it to the Mason, Harn, to complete the quest.

As a reward he’ll offer to let his son, Pat, help you in the fields. He’s a decent archer. You can also choose the book ‘Specters, Wraiths, and the Damned‘, or 400 Orens.

If you can’t be bothered searching for the Car Harness you can also place Strong Alcohol in the Santon to befriend the Griggs.