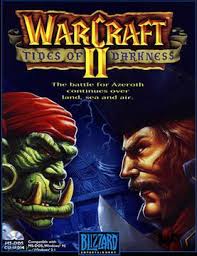 Warcraft 2: Tides of Darkness continues the saga of the war between the Orcs and Humans. This time they’ll fight on land, sea and in the air. New units include Dragons, Zepplins, Juggernauts and Death Knights. It includes a campaign for both the Orcs and Humans with 14 missions in each campaign.

The maps in Tides of Darkness are far larger than those in Orcs and Humans. The largest are four times bigger than the original maps. It features SVGA graphics with an improved user interface. You can now group up to 9 units at a time, with 6 units being able to find on sea transports.

In addition to collecting Gold and Wood you’ll need Oil for your ships. Some ship upgrades and structures also need oil. You can find oil by constructing an Oil Rig over an Oil Patch. Tankers will then gather the oil and deliver it to your Shipyard or Refinery.