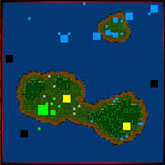 You begin on an island with a Gold Mine nearby. There’s another Gold Mine on the eastern side of the island but you’ll need to get through a few Human troops to get to it.

Send your Troll Destroyer around to circle the island and take out all of the enemy units. Once that’s done you can safely send Peons around the whole island.

Don’t worry about land units for this mission you only need to control the sea. Once you have the resources build a Shipyard. You have a little bit of Oil to start with, enough for 2 Troll Destroyers. Build a Tanker and then an Oil Rig on the Oil Patch to the south.

Now that you have a oil coming in build a few more Destroyers and send them out to take control of the sea. There are another 3 Oil Patches but the Humans will control at least one of them.

You’ll need about 6 or 7 Destroyers to clear the sea of enemy ships and destroy their Oil Platforms. Build your own Oil Platforms and once the last one has been completed the mission will end.