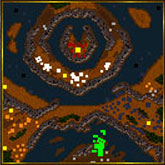 Undoubtedly the most difficult mission for the Human campaign. You’ll be harassed by Dragons until you can destroy the Dragon Dens. Send you combat ships west to cause havoc with the Towers and enemy units. Quickly send in your Transports to drop off your fighting units and clear out coastal area.

Transport across your Peasants and build a Town Hall. Start mining for Gold and build a Lumber Mill immediately. You’ll need the mill so you can build Guard Towers. Build three Towers and turn them into Guard Towers as you’ll be attacked by Dragons very early on.

Once the initial area is secure move north to claim the second Gold Mine. Once again build Guard Towers around the mine and to the east. The enemy Death Knights may cast some kind of plague to destroy your buildings. I like to move a Flying Machine to the east of any of my buildings so the enemy targets them with spells rather than my Towers.

Once the second mine is secure build an army of Knights and Archers. You’ll need the Archers to fend off any Dragons you meet along the way. Send your army to claim the Orc camp on the eastern side of this land mass.

The Gold Mine in the Orc camp has a fair amount of Gold so you’ll have enough resources to build a flock of Gryphon Riders. Send the Riders north to take out the Guard Towers and Dragon Dens. It may take a few attempts given the number of enemy Dragons.

Continue pushing north to the Great Portal. Once you’ve killed off the Daemons and Death Knights guarding the Portal there’ll be nothing to stop you from destroying it.