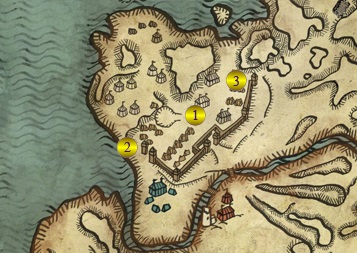 This quest begins when you talk to the Drunk Guards (1) around camp who are shouting out the name Odrin. He can be found outside a Cave (2) when you leave the camp by the western gate.

Odrin is as drunk as a skunk so you’ll need to carry him back to camp. The guards at the gate will be suspicious so you can either bribe them with 30 Orens or try to persuade them by saying he’s a witness or a prisoner.

Once you get Odrin past the gates carry him around to all the soldiers who’ve been calling his name. Once they’ve all been gathered together head towards the Canteen (3).

You’ll get to have a chat with the soldiers. Pick your answers carefully and they will reveal that they’re part of the conspiracy. They’ll give you a Square Coin and you can proceed with the next step of Conspiracy Theory.