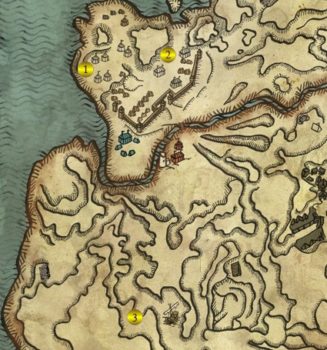 The Assassins of Kings quest is only picked up late in Chapter 2 once you’ve completed The Blood Curse and lifted the curse from Henselt. He’ll invite you into his Tent (1) and during the discussion an assassin will sneak into the tent and attempt to kill him.

Geralt uses the Aard sign to knock the assassin outside. When you run out to fight him you’ll be attacked by a second assassin. Try to face them one at a time by using traps, bombs or the Yyrden sign. The assassins do a lot of damage with a single strike to make sure you can either parry or dodge out of the way.

Once one of the assassins is killed the other, Serrit, will run off. Completing this battle earns you the Swordsman ability which increase sword damage by 4. Due to the threat of being assassinated King Henselt refuses to give you the Medallion for the Faith Symbolized quest. You’ll need to hunt down Serrit first before the king will part with it.

Make your way over to Dethmold in the Medical Tent (2). He’ll perform a ritual allowing you to see into the mind of the assassin’s past. In the first vision you’ll be follow Serrit to his Hideout (3). Along the way you’ll be talking about the upcoming assassination attempt on King Henselt.

Once you’re inside the hideout make sure you follow directly behind Serrit. The place is loaded with traps and one false move could end the vision. You’ll Letho and find out that Sile is working with the assassins.

In the second vision you’ll be sneaking through the Kaedwen camp. Make sure you wait for the guards to separate before moving forwards. If you get caught you’ll have to redo the vision. Once you kill the guard you’ll move into the third vision.

For the last vision you’ll be talking about Letho and Loc Muinne before having to fight your way past the guards. This is where Geralt exits the tent and you’ll need to fight him. Don’t worry about trying to kill him, it’s impossible.

After the visions report what you learned to Dethmold. You’ll be taken to the Hideout (3). Enter the hideout and be prepared to fight Gargoyles. They explode when they die so roll out of the way after the death blow. You’ll also have to fight a Golem. If you’ve dealt with one before killing this one will give you the David ability which grants a 10% damage increase against large creatures.

Continue forwards to find Serrit lying in a pool of his own blood. Sile got to him before you. This will awaken a part of your memory of the Wild Hunt and your search for Yennifer. Search Serrits body for some Notes and a Diagram: Conflagaration.

Return to Dethmold in his tent in the Kaedwen camp. He gives you the Medallion for the Faith Symbolized quest. That’s all you can do for this quest in this chapter. It continues in Chapter 3.