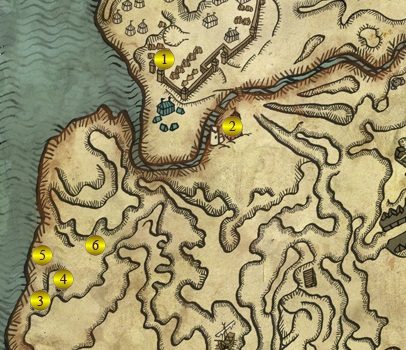 When you walk through the camp you’ll see two soldiers picking on another older soldier named Mavrick (1). When you talk to him he’ll tell you that he’s being haunted by spectres ever since he saw one on the beach.

Make your way over to the brothel camp and speak with Liva (2). She gives you some extra details about what happened. The House (4) was the home of a healer called Malget. Someone murdered his childred and Malget couldn’t live with the pain so he threw himself into the river.

Make your way over to the Graveyard (3) and you’ll see the gravestones of the three children and Malget. The gravestones have signs on them. The one you want to take notice of is the symbol on Malget’s gravestone. Once you’ve looked at it the quest will update and you’ll need to investigate the House (4). Inside the house pick up Malget’s Notes which begin a quest called From a Bygone Era.

You’ll need to wait until it’s dark to see the specters so meditate until 23:00, head down to the beach and speak with the Specter (5). The specter tells you that Mavrick killed the three children and that’s why he’s being haunted.

Make your way back to Mavrick (1) and ask him about it. You can accuse him right away or listen to his side of the story. If you accuse him he’ll run to the beach and the quest will result in a failure. If you believe him he’ll tell you that he’s not the murderer but Malget was involved in using blood magic.

Make your way back to the beach and meet Mavrick (6) and then continue down to the specters on the beach. You can choose to either side with the specters or with Mavrick. Siding with Mavrick reveals the truth. Mavrick was the brother to the three murdered sisters. Malget murdered his three daughters because they were violated during the war and he couldn’t bear it. Mavrick possible killed his father, Malget, in revenge.