The Butcher of Cidaris 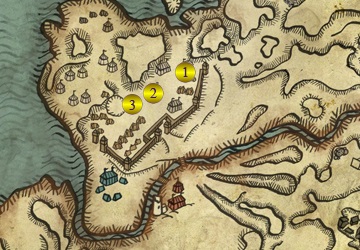 When you approach the Cantina (1) you’ll see a father and son arguing. The son wants to take part in the tournament but is worried about his opponent, the Butcher of Cidaris. After witnessing the argument enter the Cantina and speak to the father, Manfred. He’s worried about his son getting injured in the fight. You can offer to help Manfred in return for a favor.

Head outside to find Sven, the son, training for the duel. There’s no way he can win on his own but he does agree to make it a 2-on-2 battle if you can find someone to join the other side. Visit the Butcher of Cidaris (2) and convince him to duel in pairs. Someone named Edwin Leistham will agree to fight on the Butcher’s side.

When you are ready head back to Sven and tell him to prepare for the fight. You’ll end up in the arena with the announcer commentating on the fight. Defeat the Butcher and his friend, which should be fairly easy for a Witcher, and then speak to Manfred and his son outside the arena (3). In return for your favor he’ll give you some important information for the quest Conspiracy Theory.

The king notices your prowess on the field and invites you to participate in an upcoming tournament. This is detailed in the quest Ave Henselt!.