When you arrive in the Tibetan Foothills take out your gun immediately as you’ll be attacked by a vulture. Head down the path and jump over the slope, sliding down the other side. When you drop down an avalanche will start rolling down the hill. Shoot the ice to the left and go inside the cave. Just watch out for the tiger inside! 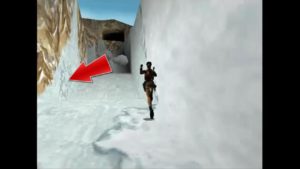 Continue up the slope and you’ll trigger another avalanche. Once again run back into the cave and pick up the automatic pistol clips in the corner. Head up the slope again and climb into the cave at the end. Follow it around, do a running jump through the ice wall, slide down and jump forwards to grab onto the climable wall.

Shimmy across to the right and drop down onto the path. Head forwards, veer to the left and take out another two vultures as you exit the cave. Walk to the edge and look down. 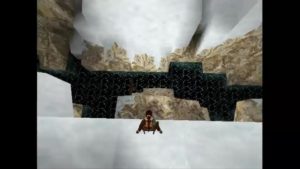 Turn around and hop backwards to grab onto the edge of the cliff. Drop down. You’ll slide backwards. Hang onto the edge once again. Shimmy across to the right and pull up. Turn around until you facing diagonally across the river to the sloped block on the left side.

Path to the Hut

Do a running jump across. You’ll slide down onto a flat block on the other side of the river. Pick up a large medi pack and then jump diagonally across to the snow covered block. Turn to the right and start climb up the blocks to the top of the cliff.

At the top you’ll be attacked by two gunmen. Take them out and pick up the large medi pack that one of them drops. Facing the hut from the cliff turn right. You’ll notice a closed gate far to the right. Head towards it and pick up the Silver Dragon in front of it. 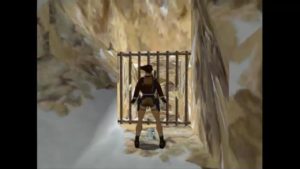 Turn around and jump in the snowmobile. Drive through the tunnel to the left and follow it around. You can run over the thugs without needing to waste any ammo.

Soon you’ll come to an open area with large ramps. Before you use your snowmobile you’ll need to move some blocks out of the way. Get off your snowmobile. Directly ahead from the entrance to this area is a small gap in the wall. 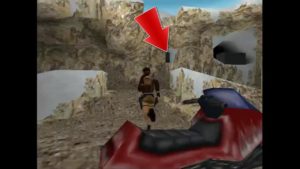 You’ll need to jump up to the ramp and jump into this hole. Follow the passage around to two movable blocks. You’ll be attacked by two tigers here from the left. When you have killed the tigers pull the two movable blocks out of the way of the entrance to this cave as you’ll be driving the snowmobile through this entrance in a minute. You can push them into the passage you come from if you like.

Drop down to the ramp area and get back on your snowmobile. Position yourself in front of the ramp in the middle of this area. See pic below. 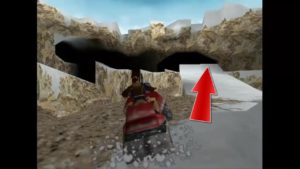 Turn your snowmobile around to face the series of jumps towards the cave entranced you unblocked. Take the jumps and go through the cave. Continue along the passage and take the right path when you come to an intersection. It’s easy to miss so take it slowly when you see a drop in front of you.

Follow the right path along and get off when you come to a dead end with a climable wall. Pick up the 2 sets of grenades first and then climb up the wall. At the top pull the switch down to open a wooden gate. Drop back down the ladder and climb onto the snowmobile.

Two or three guards will appear as you make your way back to the intersection. You can just run over them and keep going. This time take the left path from the intersection. This will take you through the wooden gate that you just opened.

Follow the path along, over a walkway and run over the next three guards standing in your way. When you come to a large ramp get off the snowmobile. 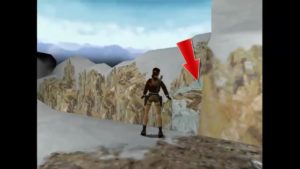 Walk towards the ramp and turn right. Make a running jump across to the ledge and pick up the Jade Dragon. When you do two tigers will appear. You may be able to shoot them from this ledge. If not jump back across and take them out. 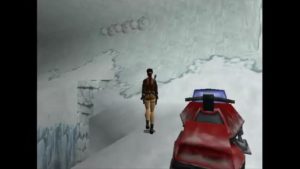 From here do a standing jump diagonally across to the side of the slippery slope just above the climable wall. Hold onto the edge and drop down. Pull up into the cavern below and grab the Drawbridge Key.

Drop down into the hole and follow the tunnel around to some ice walls. Shoot through them to break them and kill the guard on the other side. Continue through the tunnel until you spot the wooden door. Below it to the left is a switch to open it but when you approach ice crystals fall from the roof. Walk slowly to trigger the ice crystals and then pull the switch.

Head out the door and drop down into the open area below. In the far left corner is a hole in the floor. Drop down it to stay safe from the tigers that appear. You can jump and shoot them from here. Make sure you pick up the 2 sets of grenades before pulling up out of this hole.

Pull up out of the hole and run to the other side of the open area. On the end wall to the left is a section that is climable. Climb up the blocks to it and make your way up the side of the cliff. Climb all the way to the top and get off into the tunnel to the right. This is where you left your snowmobile.

Drive across on the right side so you don’t fall down the gap to the left. Follow the tunnel out to a large open area. There’s a lock to the left as you enter. Use the Drawbridge Key to raise the drawbridge. You can now drive your snowmobile around the ledges and over the drawbridge.

Continue through the tunnel and hug the right wall when you come to a gap in the floor. You’ll hear a huge rumble as snow drops down in the cavern. When you emerge you’ll be able to find the Hut Key near the pile of snow.

When you grab the key a gunman on a snowmobile arrives. Either take him down or escape through the exit under the where the drawbridge was. Continue through the tunnel, around the hole in the floor and then over the jump. The bad guy on the snowmobile won’t be able to follow you over the jump.

Back to the Hut

Continue through the tunnel, over the walkway, back to the ramp arena and then back to the hut. You’ll have to get out and walk the final part of the way as there’s a small rise that the snowmobile won’t be able to get over. There’s also two tigers here that you’ll need to take down.

Head back to the hut and use the Hut Key to open the front door. Inside to the left you’ll find 2 sets of M-16 clips and to the right a small medi pack, 2 sets of Uzi clips and a switch. Pull the switch to open the wooden gate to the right of the hut. Three goons will run out so get your best gun ready.

The bad guys drop auto pistol clips, a large medi pack and Uzi clips. Head through the open gate and run to the end of the tunnel. You’ll come to another large open area. 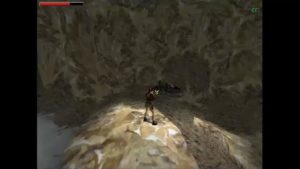 When you drop down a snowmobiler will attack . Jump onto one of the rocks and take him out from there. You can now hop onto his snowmobile and ride it through the exit. This snow mobile doesn’t have a boost but instead has front mounted guns. These will come in really handy for the next battle.

When you come to the hole in the floor ride up the left side of the wall. Shown in the pick below. 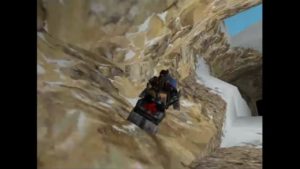 On the other side get off the snowmobile and hop backwards down the climable wall. At the bottom is the Gold Dragon. Jump to the left when you hit the bottom to avoid the rolling snowballs then go back and pick up the dragon.

Climb up the ladder back to the snowmobile. Drive it forwards into an open arena. You’ll be attacked by other snowmobilers. Get behind them and shoot them down then head through the tunnel at the end on the left side of the arena.

Get of when you come to the end and push the movable block forwards twice. You’ll be attacked by some bad guys. The easiest way to deal with them is to jump back on your snowmobile and shoot them when they get close enough.

You’ll come to a drop off to a pool below. You’ll need to aim the snowmobile to clip the rock on the left side to make it into the water. Once there pull up out of the water and make your way around. Jump across to the other side and head through the tunnel to the left to finish the level.