Run down the left or right side of the steps to avoid the falling ice crystals. Follow the path in the next room to the left and jump and grab the crevice. Grapple across to the right until you can pull up and drop down the other side. Pick up the flares and the Silver Dragon. 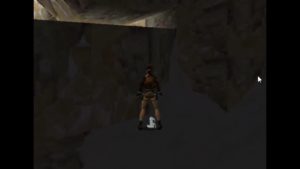 Climb back up. Jump across to the path and slide backwards. Before you reach the end do a backflip to land on a ledge on the other side. 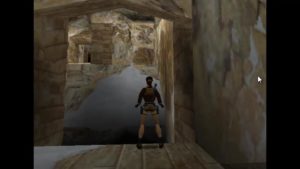 From here you may be able to spot and shoot a yeti down below. Drop down and kill the yeti if you haven’t already, run down the stairs and pull the switch next to the bars. The switch opens a door and also releases a leopard.

Head back up the stairs and then climb up the ladder to the top. Get off on the right side and walk along the path to the wall with the crevice. Once again slide backwards and do a backflip to the ledge opposite. Turn around to the right and kill the leopard.

Run down the stairs, watching out for the ice crystals that fall from above. Follow it around to the right to a new area. Keep running down the stairs. When you get almost to the end some bad guys will appear from the top and follow you down. Stand in a safe position and take them out as they approach. 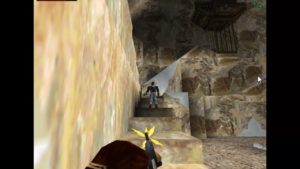 Climb back up the stairs to the first point where it twists around and turn to the right. Jump across and run up the ramp until the avalanche triggers. Then flip to the right into the pool down below. 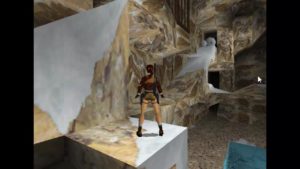 Climb out of the pool and head towards the back of the cave where a leopard will attack. Take the tunnel to the right down to where you can pick up a small medi pack.

Go back into the cave and jump up the slanted rock in front of where the leopard appeared. Turn around and jump across to the snow covered rock ledge. 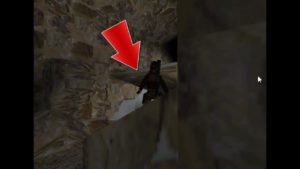 Run around the ledge all the way around to the right. Run across the collapsing tiles and jump onto the ladder. Climb almost to the top and do a backflip onto another ledge. Turn around, jump over the slope and pull the lever on the wall to your right. The lever lifts up the cage with the first Tibetan Mask. 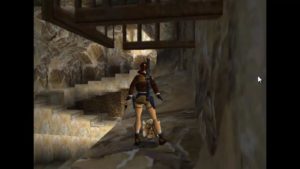 Grab the mask, continue forwards and slide down the slope. You’ll notice that the pool in the center is drained. Carefully drop down into it and run along the passage. Jump over the pit and around to the left. Use the Tibetan Mask on the gate to unlock it.

Run up the slope and flip across to the right to trigger the avalanche. Three leopards will attack from the far right corner of this area and one from the left side.

Run up the slope towards the big doors and then turn to face the hole in the wall to the left. Take a running jump to land in the hole and you’ll notice a door at the top. Forget about it for now and drop down the other side. 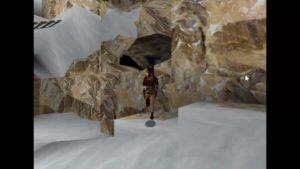 Get your guns ready and head out to the frozen lake as two leopards will attack. Another leopard attacks from your right as you walk over the lake.

Run through the archway to the right where the last lopard came from and take out another two leopards. There’s an ice wall in front of you. Turn around and climb up the block to the left of the archway as you enter. You’ll need to jump up and grab it from the side facing towards the ice wall as it’s a sloped block.

Drop down the other side and dive into the water. At the bottom is another Tibetan Mask. Climb back out and head out through the archway, taking out two thugs along the way. They drop two automatic pistol clips, a small medi pack and Uzi clips.

Head back the way you came, climbing back up the blocks and dropping down to the ramp with big doors and balcony with red railing. 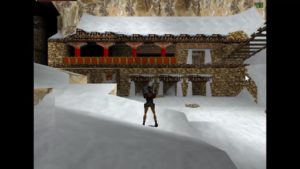 Run around to the left side of the building ahead and climb up the ladder. Drop off to the right and pick up the two sets of grenades. Drop down, use the second Tibetan Mask on the lock and go through the door.

This large room is very dark. Drop down and light a flare. Head around to the left and jump over to the second ledge. Pull the lever which opens up all the cages and releases three yetis from down below. They’ll quickly run up the stairs to get to you so shoot them down before they get close.

You’ll see a block in the corner. Pull it out across three times so that it’s in front of the first cage door. Go through another door and pull the block so that it stands under the bars. This will keep the bars open, preventing you from being trapped inside.

Pull the lever at the back of the cage which opens the door in the hole of the wall that you explored earlier. It also closes all the cage doors if you haven’t blocked it with a movable block.

Run back up the stairs and climb out of the exit. You’ll be attacked by three thugs as you leave the building. They drop a small medi pack, Uzi clips, two sets of shotgun shells and two sets of automatic pistol clips.

Jump back into the hole in the side of the wall again and this time go through the now open door.

Run over the first bridge, take a left before the second to let the snowballs roll past and continue over the second bridge. 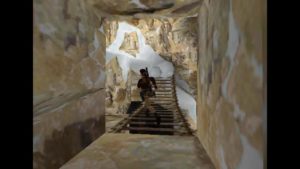 Run all the way to the end, turn right and take a running jump over to the ladder. Climb up the ladder to the top and go to the end of the cave where you’ll find a hole in the floor. Drop down the hole into the water below.

Pull up to the side and shoot the fish in the water. Dive into the water again and swim through the opening. Swim around to the left and climb onto the block below the ladder. 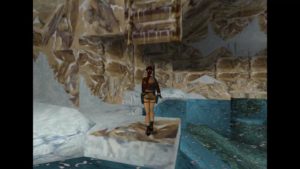 Climb up the ladder to the second rung from the top and do a backflip. You’ll land on a rock ledge with the Jade Dragon behind you. Pick it up and then drop back down the ladder. Dive into the water and follow the lake around.

Climb up the pillar standing in the water towards the end of the lake. Do a running jump to grab the bottom rung of the ladder and climb up to the top. Do a backflip to land on another ledge. 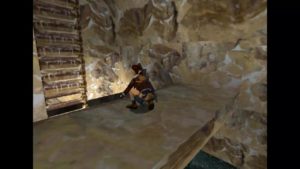 Turn to the left and pull the lever to open the doors below. Drop back down to the lake and head through the doors.

Kill the leopard and pull the lever on the block to open the large doors in the open area. Walk to the right of the fire pot and take a running jump across to a sloped block where you’ll slide and drop to the ground below.

Now turn around and climb back through the hole in the wall to the outside area with ramp and big doors. 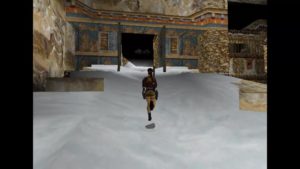 Just beyond the doors is a gap in the floor with three leopards below. Kill the leopards and then pick up the large medi pack, grenades and M-16 clips in the corner.

Pull the lever in the alcove to open the doors to the side. Another leopard will run out to attack you. Head through the side door and back up the ramp to the big doors. This time jump over the gap in the floor. 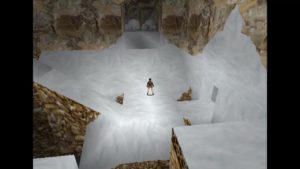 There are two sets of snowballs that you must trigger before continuing. Ahead of you and to the left. Jump ahead once to trigger the first set of snowballs. Then jump backwards and flip to the right out of the way.

Turn around to the left and do the same thing. Jump ahead, back and to the right to avoid the snowballs. The snowballs will crash through the ice to the right and make an opening for you. Head through. 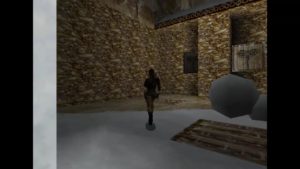 There are two pressure plates on the floor, one behind the snowballs and one to the left. Run over the one to the left which opens the left door and jump through it. Turn left before the spikes and climb up the wall. Drop off to the left, turn around and pick up the Golden Dragon. 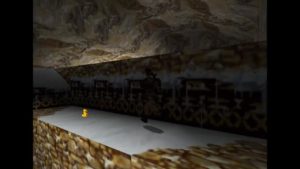 If you have all three secrets you’ll also get a bonus two sets of grenades and two sets of M-16 clips.

Drop down the ladder and continue around the passage to end the level.