You start the level at the end of an alleyway. Run down the alley and kill the doberman. As you get out into the open run to the right and look up to shoot the sniper on the balcony. 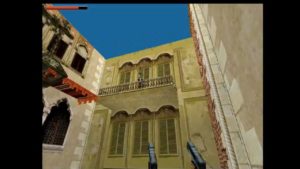 Run down the alley to the left and watch out for another dog and a thug with a baseball bat. Ignore the house to the right and dive into the water. Swim under the door straight ahead. This is the room with one of the speedboats. 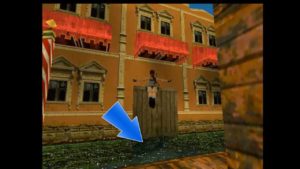 On the right side is a button that opens a door in one of the villas. Press the button and swim back out. Climb onto the wooden platform and go into the room. Pick up the flares from on the table.

Press the button to open a trapdoor in the roof. Climb or jump up to the next level. Press the button in this room to open up another trapdoor. Climb up onto the balcony.

From here either shoot or jump through the window to break it and get into the top level of the villa. 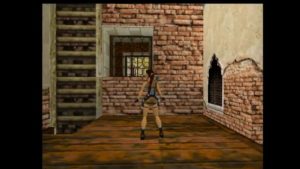 A dog will attack from a hallway to the left. Kill the dog but ignore that area for now. Instead shoot the window on the other side of the hall and climb out onto windowsill. Jump across to the red awning.

Jump across to the balcony where you shot the sniper and pick up the Boathouse Key. Jump back to the red awning. You may need to step back a little from the railing. Jump back through the window and head towards the chequered room where the doberman appeared.

Run across the walkway with glass walls and pull the switch at the end. A small door will open near to a red awning. Go back to the chequered room and blast the window with your pistol. Take a running jump across to the red awning and keep jumping to the left until you reach the small door that you just opened. 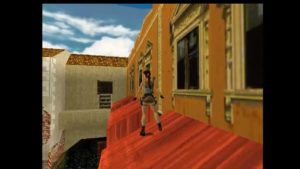 Pull the switch inside which opens the gateway in the canal underneath you. Dive down and swim into the boathouse. Use the Boathouse Key to open the door and take the Speedboat for a ride. 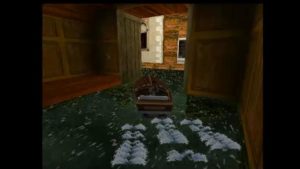 Drive the speedboat to the right, through the gate you just opened but don’t go far. Stop as soon as you are inside. Light a flare and hop out of the boat to the passage on the right. It’s here that you’ll find the Silver Dragon. 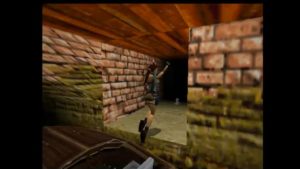 There’s also some flares just beyond the dragon. If you drop down you’ll be attacked by some rats. Head back to the speedboat and continue forwards until you drop down a waterfall. Stop the boat in the middle of the pool and get out.

At the bottom of the pool you’ll find the Gold Dragon. Pick it up and get back in the boat. Take the only exit from this pool and park it in the Boat Lock in the far left corner. 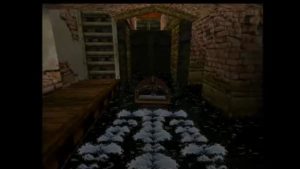 Hop out and climb up the wooden platform which should now be on your right. There’s a rat on the platform and a gunman on the other side of the window. Take them out, enter the room through the window and pull the switch which should be on the right side from entering the window. The switch raises the level of water where your boat should be docked.

Head out of the window and climb up the ladder to the left. Drop down into the water and pull the switch to open the gate up ahead. Climb back into the speedboat. Go out of the gate and turn immediately to the left. Follow this around to the right to smash through the gondolas.

Park your boat near the walkway and hop out to the right. 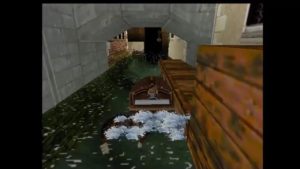 Stand under the bridge and kill the gunman on the steps to the left. Don’t go over to him yet, we’ll be back later. For now climb up the wooden block behind you and do a standing jump over to grab the red awning.

Turn to the right and jump onto the bridge. Immediately backflip back to the awning because a thug with a baton and a dog will attack. The thug drops a large medi pack. Once they’re dealt with jump back to the bridge and go to the right. A gunman will run out. He drops a Steel Key when you kill him.

Head up to the door on the left and use the Steel Key to unlock it. Go inside and drop down the hole to the right. Turn around and pull the switch on the other side of the room. This opens one of the canal gates. Climb back up and deal with the gunman who drops two auto pistol clips.

Return to your speedboat, turn around and head back the way you came. Go past the entrance until you spot a gunman on a wooden platform. 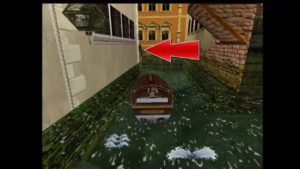 He’ll do a lot of damage to you if you just drive past so stop your boat and swim underwater to the platform. Pull up and take him out. He drops a large medi pack and two sets of shotgun shells.

Dive back into the water and get back into your boat. Continue forwards and take the first right underneath the clothesline. Then take the first left through a small canal. At the end take a right and smash through the two gondolas. 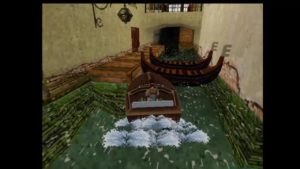 Head into the room and take out the rats. Pull the lever on the left which opens a door elsewhere. Go outside but before you leave this area turn to the left and jump up to grab onto the walkway above the canal. Pull up and jump through the windows to grab the Jade Dragon inside. If you have all three dragons you’ll also get 4 sets of auto pistol clips as a bonus.

Jump back into the boat and turn around. Continue straight forwards under a walkway and turn left. Take the next left under the clothesline and continue forwards until you come to the second platform on the right. 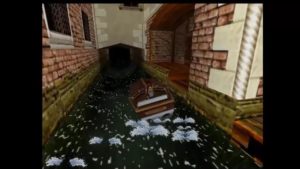 This is the door you just opened. Go inside and pick up the Iron Key. Climb up the ladder to the level above. Watch out for the thug and dog when you get there. The thug drops a small medi pack.

Pull the lever in the corner to open the doors back out to the canals. Drop down and get back into your boat. There may be a gunman on the platform next to this one. Take him out before continuing.

Drive the boat back the way you came, forwards under the clothesline, left at the end and continue around, hugging the houses to the right until you come back to the walkway and platform where you killed a guy on the steps. 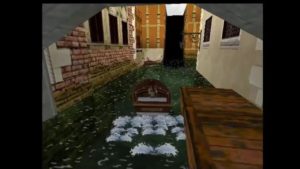 Save your game! The first thing you want to do is drive the boat straight ahead and into the passageway trapped with underwater mines. Jump out of the boat before entering the canal. The boat will trip the mines. 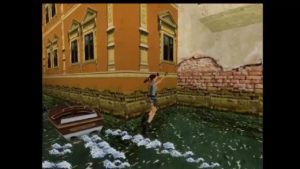 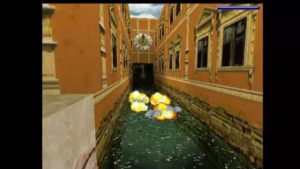 Swim back to the steps and pick up the two sets of automatic pistol clips from the guy you killed earlier. Use the Steel Key to open the door and go inside. A masked gunman will run towards you, dropping a small medi pack once you’ve killed him.

Hop inside and pull the switch just next to the windows. This opens the second canal gate. Hop into the speedboat parked next to the steps and head forwards. Follow the canal around to the left and take the first right. Continue all the way forwards until you come to a small water room. 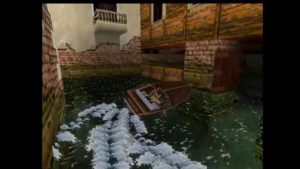 Jump out of the boat as soon as you can and take out the gunman on the platform. He drops some auto pistol clips.

Now get back into the boat and line it up so that it’s facing the ramp. When you push the button behind the gunman you have a certain amount of time to get back to the exit just beyond where the mines where located.

With the boat lined up press the button and hop into the speedboat. Remember to use the action button for a speed boost.

Head up the ramp and then over the larger ramp to the left. If you have enough speed you’ll sail through the windows and over to the other side. 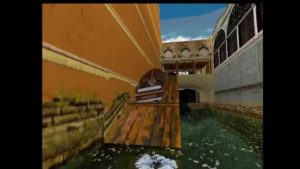 Continue forwards and then right through the small canal past the two canal gates you opened earlier. At the end take a right through the gates to the level exit. If you don’t get there in time head back and try again.