Lara wakes up in a prison cell. Head around the back and pull out the movable block twice. 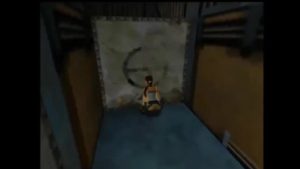 Climb over behind it and run down the passage to the right. There’s a switch here. Once you pull it you have a limited time to escape the prison. Pull the switch, do a running jump onto the movable block, turn to the right and run out the open door.

You’ll see some gunman running out. Ignore them for now and dive into the water. Swim under the plane and pull the lever on the left side of the underwater fan with the Jade Dragon behind it. This will open a trapdoor near to the fan. 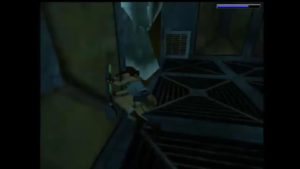 Follow the tunnel around and up until you come to a square room. Close to the floor on the left is a lever. Pull the lever to open a grate above you so you can swim up and take a breath.

Dive back down and follow the second tunnel. Follow this winding tunnel around until you find the Jade Dragon. 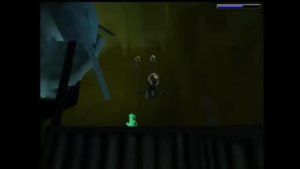 Follow the tunnel back to the square room and pull up to take a breath. Pull up into the passageway here and run forwards. Follow it around to the left and you’ll come out on a walkway above the pool. Jump across the first gap in the walkway and then drop down to find a button. 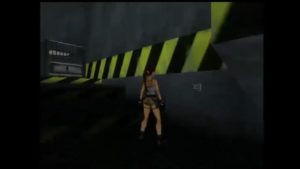 Drop back into the pool and go through the tunnel in the corner back to the square room. Once more pull up into the passage and follow it around to the walkway. Jump across the first gap in the walkway and drop down to where the button is.

This time position yourself as close as you can to the plane wing as in the pic below. 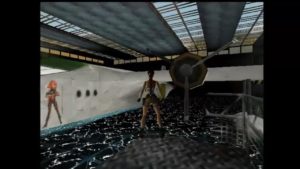 Hop back and take a running jump to grab onto the wing. Pull up and drop into a hatch in the center of the plane. It’s here you’ll find your Pistols. Grab them and climb back up the ladder to the top of the plane. Orientate yourself so that you’re facing the side with your prison cell. Dive into the water and pull up here.

Now it’s time to deal with the thugs with batons who came out earlier. If they get too close you can always drop back into the water. One drops a large medi pack and the other a Yellow Pass Card.

Run half way up the ramp and jump to the left as the barrel comes rolling down. Now go to the end of the passage and take the stairs up to the right into another room overlooking the pool.

Use your Yellow Pass Card on the lock on the right to open the door leading out of this room. Head through and push the button at the end to turn off the alarm. 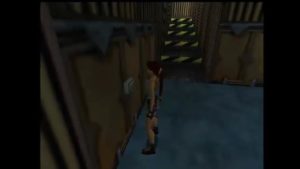 Head up the stairs to the right and then turn the wheel to open the door. As you enter a thug will appear behind you with a baton. He drops a small medi pack. Continue through the room and to the right. Another thug here drops a large medi pack.

As you head up the ramp the door closes in front of you. Turn the wheel on the door to the right instead and go through. Take out the thug who drops another large medi pack. On the bench to the left are two automatic pistol clips and two harpoons in front of you.

Continue through the passage to the right to the bunk room. On the bed at the end on the left is a Harpoon Gun and harpoon.

On the top bunk to the left as you enter there’s a button. Pushing it will open a door briefly on the other side of the room. To get to it push the button, drop down and run climb up the last bed at the end on the right. Turn around and do a standing jump to pull up into a passageway.

Run through the passage, turn around and drop down backwards onto the slide. Grab onto the edge when you reach the end. You can now safely climb down the ladder. 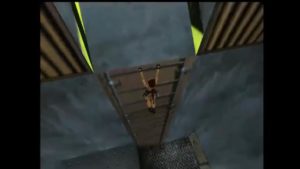 In this room are four lit fires in front of a ladder and two movable blocks. Pull out the block on the right as you are facing them and push it all the way to the wall opposite the ladder you came down. Pull out the other block once and to the side once. Run around to the back of it and push it once so it’s next to the fire. Climb on top and do a running jump across to the ladder. 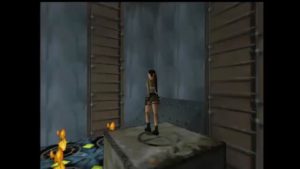 Climb up to the top of the ladder and into the passageway. Take out the thug with the Red Pass Card and go climb up the ladder just before the steps. Up the top you’ll find the Silver Dragon.

Drop back down the ladder, go up the steps and drop into the water, which is the square room you went to at the beginning of the level. Pull up into the passage and run around to the walkway.

Jump across the gap in the walkway but this time shoot out the glass to the right. Run through the door you opened with the Yellow Pass Card and this time take a right up the stairs next to the button that turned off the alarm.

Around the corner is a doberman and an armed thug. Take them both up and pick up the Uzi clips. On the left is a ramp with barrels. Run past the ramp to trigger the barrels and then run up the ramp to a locked door. Use the Red Pass Card on the lock to open the door.

To make it past the next section alive stand at the doorway and shoot the armed guard on the walkway to the left. Once he’s dead take a running jump across to the left walkway. 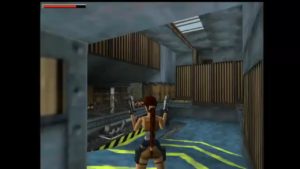 From here you can shoot the two guards with clubs on the ground level without being hit. The armed guard up the top drops shotgun shells and one of the guards with a club drops a small medi pack.

An alarm will be sounding when you enter the Red Room but there’s nothing you can do about it for now. 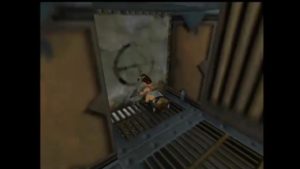 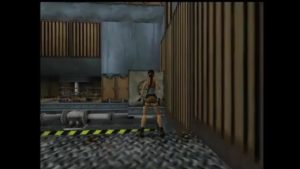 Pull up, turn digaonally to the right and do a standing jump to land in the passageway above. Run down the passageway, take out the guard and pick up the shotgun shells. On the left wall in the center is a switch that’s hard to see. Pull it to move the water from one pool to another.

Go back through the passage and drop back down to the room with walkways. Climb up the right walkway and dive into the pool that now has water in it to climb up the other side. Run around the back of the structure, jump over some pipes behind it and then over a small ramp to find a switch on the side of the structure. This opens a trapdoor in the room you were just in.

Swim back to the movable block and standing jump into  the higher passageway again. Follow the passage through to the room with the switch and drop down the trapdoor. Slide down the brown passage to a large area with industrial catwalks.

Catwalks go all around this large area and divers patrol the waters beneath. If you head to the right a little Lara might be able to spot and shoot some of the divers under the water. Otherwise head to the left as far as you can, turn right and take a running jump to the next catwalk. We’ll be making our way clockwise around this massive room. If you fall off at any point there is a ladder next to the base of a pylon to the far left of the room.

Pick up the Shotgun from the guard here and continue around clockwise. At the end of this catwalk you can target another enemy. Then do a running jump over to his catwalk. 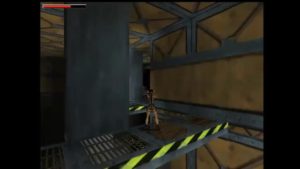 You’ll see a glass case with the Green Pass Card inside. Jump through the glass to break it and pick up the card. An alarm starts sounding as soon as you break the glass.

From here if you go to the edge of the catwalk and look down you’ll be able to see the Golden Dragon and the last secret for this level. 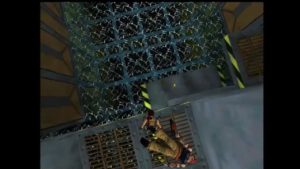 Swim anti-clockwise past one pylon and then climb onto the second. From here you can jump across to a ladder. Climb up and drop down to the catwalk to the right. Follow it along clockwise like you did the first time back to where there’s a passageway in the wall. I’ll point it out in the picture below. 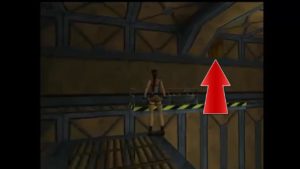 Run up the brown/orange passage and climb the ladder at the end. Drop down to a metal walkway below. An armed thug immediately approaches, dropping a small medi pack.

Head down the ramp and pull the switch which changes the water in the pools. On the opposite side of the room, near to the windows is a pass card lock. Use the Green Pass Card on the lock to open the door to the right. Go through it and head to the right with the pool that should now have water in it.

Dive into the water and go through the tunnel on the other side. Pull the lever to open the gate. Go through, pull up out of the water and continue forwards to end the level.