You’ll begin the level deep underwater. Immediately roll and swim forwards, veering slightly to the left as you follow the trail of debris. A shark may attack from the right but don’t worry about it. Just keep swimming! Eventually you’ll come to an upside down ship where you can enter just behind the rusted anchor. Swim through the passage and pull up when you can to take a breath.

Once you have your breath back dive down and go through the hole underwater to the right. 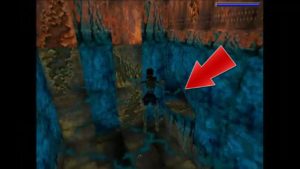 In the next room turn to the right and swim up the hole in the top left. Continue forwards and swim through the next hole in the wall to the far left.

Turn again to the left and on the far left wall is a lever that opens a trapdoor in the floor. Pull the lever and turn around immediately to swim down the hole in the floor. Turn left to swim to the other side of the room and through a gap in the wall to the left. Pull up all the way to take a breath.

If you’ve made it all the way through those rooms you’ll emerge into a larger room with wooden crates.

There is a secret behind the tall stack of crates. To find it dive down, head through the gap beneath them and then pull up. Run around the corridor and pull the lever which empties the water in the previous room. Drop back down and head back to the room with crates.

Climb up the small crate and standing jump across to the higher one. Then to the crate below the opening in the wall. Then climb up and into the opening. 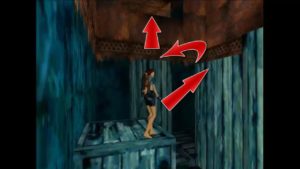 Drop down into the room beyond with your guns ready to take out a guard who appears from the right. What’s he doing down here anyway? He drops some shotgun shells.

Don’t head straight for the Dragon just yet as the floor is trapped! The four central blocks open to become a trapdoor when you walk or jump over it. You can jump over the corner of one of the blocks to release the floor and still be able to pick up the statue. 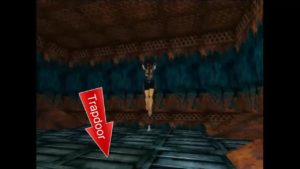 Grab the Silver Dragon and go over to the edge of the trapdoor. If you look down you may be able to shoot one or two of the guards from here. Otherwise drop down onto the crates and take them out. They drop a harpoon and small medi pack.

Jump on the small crate in the middle and then running jump to the large crate by the wall with a sloped block next to it. 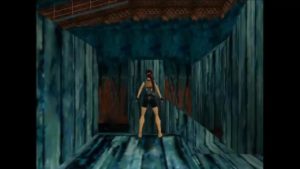 Turn left and do a running jump to grab the exit out of this room.

This starts a fairly tricky section with levers and timed doors. Pull the lever to the left of this passage as you enter. This opens a door down the end of the corridor and to the left but it won’t stay open for long. There are pipes along the floor so you’ll need to time your jumps over them to make it straight down the corridor. At the end turn left and jump or climb into the doorway.

Drop down into the water, ignore the barracudas and head out into the open to grab the Jade Dragon. 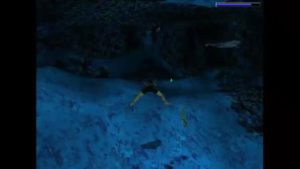 Head back through the passage you came in and climb up back into the corridors. To the right side of these corridors as you entered this area are four burners. You’ll need to turn them off to get past this area.

From exiting the timed door you went through to drop down and get the Jade Dragon here are the instructions.

Take the first right and then the first left into a darker area. Turn to the wall on the right to find a ladder. Climb up the ladder and pull the lever. This opens a door around the corner but it’s not timed so you don’t need to hurry.

Drop back down into the dark corridor and continue in the direction you were going. Take a right and then follow the corridor around to the right a couple of times and jump through the door you just opened.

The switch in here is timed so it may be a good point to save your game. 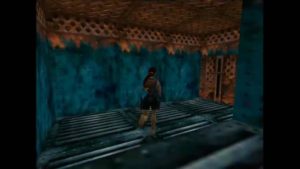 Pull the lever, turn around and jump out of the room. Follow the corridor around and take the first right. This is where the burners are and the lever you just pulled turned the first two levers off. This allows you to get to another lever on the wall next to the second burner. 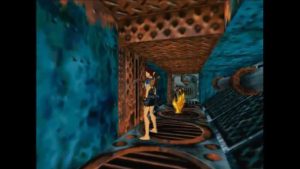 Pull this lever. Head back out and take a right. Follow the corridor around to the right and jump into the high door to the left. Run in, pull the lever which turns off the last two burners and jump out of this room.

Run into the water to draw out a barracuda then hop back out to shoot if from above. Now you’ll need to get past another timing puzzle but this time it’s your breath that counts as the time!

Dive into the water and pull up into a series of stacked rooms. In one corner of each floor/roof is a hole that you can swim through. Swim up to the third(top) room and pull the lever to open a small door at the bottom. Swim all the way day and through the small opening.

There’s another lever here and also the last dragon in the alcove to the right. If you don’t have much breath left just pull the lever and swim all the way to the top to take a breath. You can come back down to pick up the Golden Dragon when you have more time. If you have all the secrets you’ll also get four sets of harpoons. 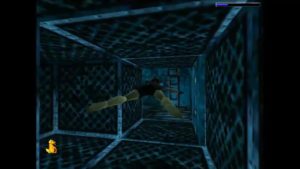 Swim up to the top room and pull out. Run down the corridor and drop down into a room with dirt. You’ll slide down to the ground. Head around to the right and drop down another hole into another room filled with dirt.

Drop down to the metal floor and turn to the right. There is an opening in the wall ahead. To reach head run around behind the dirt and pull out the movable crate. Pull it out twice and then climb on top of it so you can climb through the opening. At the end is a lever which dumps dirt into the lower room from the upper one.

Drop back down and you’ll notice a hole in the center of the roof and two holes on the left wall. You want to climb up the first hole on the left to the room above. 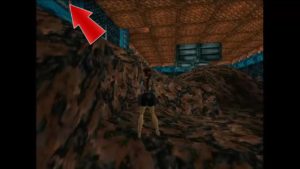 Once in the upper dirt room you’ll want to climb the dirt pile into yet a higher room. 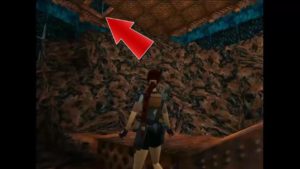 It’s easiest to do this by first climbing up the right side of the dirt and then jumping diagonally across to the dirt below the opening. Climb into the room and pull the lever which floods a room somewhere else. 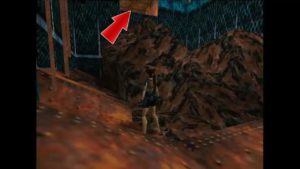 You can get around to it by climbing up on the left. Pull the lever here to open a door underwater. Drop back down and down again through the central trapdoor. Get you’re bearings because you want to climb through the bronze opening in the side wall. 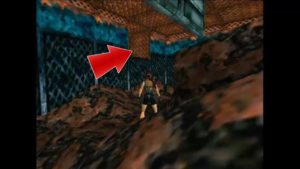 Run through the corridor and dive into the water below. Head down to the door that you opened, ignoring the diver unless you really want all of the kills. The opening when you drop into the water is directly below the passage you came from.

Follow this passage, take a left and then pull up into a room with two guards. One drops shotgun shells the other a large medi pack. Pick up the harpoons on the pad, pull the lever and head out the door to end the level.

Next Level: Wreck of the Maria Doria