Run up the steps and do a running jump across to the ladder. Climb up and run around to press a button the stops the fan. Drop into the water and swim down a passage behind the fan with two sets of grenades at the end.

Swim back into the main pool, pull the lever on the left side and continue forwards to pull up at the other end of the pool. Run to the right into a room with swinging hooks. Take out the enemies on the other side of the pool and the two thugs and a doberman that run out from the left. The thugs from the left drop shotgun shells and two sets of Uzi clips.

From the entrance to this room walk to the edge facing the first swinging hook. 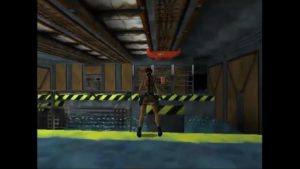 Pick up the flares and small medi pack from the guards you killed earlier.

Continue through into the room with slides and pools below. Position yourself directly in the center so that you’ll slide down into a small hole in the slide. 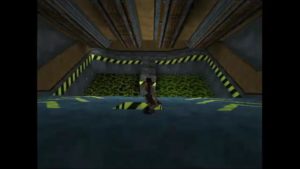 Inside this small hole is the Silver Dragon. Pick it up and then climb back up to the slide. Continue sliding down and jump across to the walkway. Head to the left and around to a very long ladder. Climb it all the way to the top and get off to the right.

You’ll come to a room with a hole in the center. Position yourself on the right side of the hole facing towards the hole. Drop down and you’ll slide down the slide backwards. At the end grab onto the edge. Let go and immediately grab onto the lower ledge. Pull up and take out the gunman in front of you. There’s not really any way to avoid taking some damage here. If the gunman pushes you off climb up through the passage at the end and run back around to the ladder.

From the walkway go to the right and turn again to the right in the space between the fencing so you’re facing a block with the Blue Pass Card. 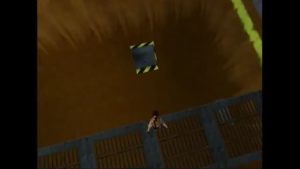 Do a running jump over to it and pick up the card. Drop down and go into the passageway at one end of this barrel-shaped room. Run through the passage and climb up the ladder again all the way to get off on the right at the top.

Drop down the slide again and this time on the catwalk turn to the left to go through another passage. Use the Blue Pass Card to open the door.

I’ll just call the next room the Square Room as you’ll come back here a few times. Directions here will be based on the way you came in facing forwards. So as you go through run immediately to the right and take down the two dobermans that attack quickly. Turn around the way you came and take out another two dobermans and a guard with a flame thrower! Keep your distance or you’ll be burnt to a crisp. 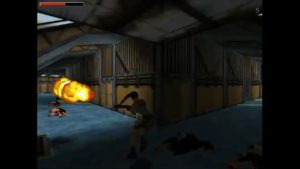 Run to the back of the Square Room, opposite where you came in, and open the door. Proceed through and take out a club-wielding guard at the end of the passage. Push the block on the left out of the way to reveal a Circuit Board.

Dive into the pool and go through the tunnel at the bottom on the far left. This will draw out a diver so you may want to pull up out of the water to take him down before going through the tunnels again. The harpoon gun in my opinion is quite weak and very hard to aim.

Go through the tunnel and pull the lever at the end. Turn around and swim through the open door to the right. Pull another lever down the passage on the left wall to open a door elsewhere. Continue forwards to the t-junction and take a right through the door that opens when you get close. Take a left and go around to pull up back into the pool.

Phew, hopefully you still have your breath!

Pull up on the side you came in, this is the only exit from the pool, and go back up the stairs on the left to the Square Room.

Take a left here and open the door on the left (right side from where you originally entered the Square Room). This takes you up the stairs to the door that you just opened. At the top are some guards and a helicopter just taking off. 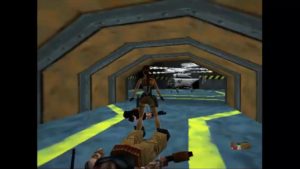 The guards drop a large medi pack, shotgun shells, and automatic pistol clips. Run across to the other side of the room and face the burners on the left.

We’ll take two runs down this hallway. The switch on the right turns off the first burner and the one on the left the second burner, but only for a short time. To begin pull the switch to the right and run to the trapdoor between the burners. You’ll drop down to where you can pick up the M-16 Rifle. Grab it, climb back up and run out of the hallway before the first burner turns on again.

Run all the way back to the Square Room, take a right and go through the first door you went through which is at the opposite side of the Square Room entrance.

Use the Machine Chip on the Circuit Board you revealed behind the movable block. This opens the door next to it. Take out the two enemies, one of which drops a small medi pack. The control panel at the other end of the room is actually a secret door that swings open when you get near to it. 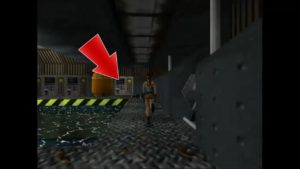 Go through it and push the button on the right to open a grate at the bottom of the pool. Dive into the pool and in the center underneath the open grate is the Jade Dragon.

Come up for a breath and dive back down. At one end of the pool is a circular passageway. Swim through it and veer to the left. You’ll be faced with two diver. Just swim past them as fast as you can into the next pool area and pull up.

You’ll be shot at from all sides. Find the one block where you can pull up out of the water and shoot the divers and guard on the other side of the pool. 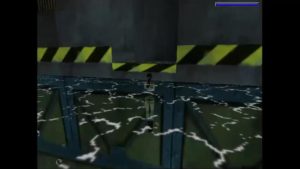 Turn around, pull up and flip the switch that opens a door where you used the Machine Chip. Dive back into the pool, go back through the passage you entered and out the circular passage into the first pool area. Climb out and exit you came in via the small blue ramp passage. Two enemies will be here to try and stop you.

From here you can go through the door on the left that you just opened with the switch. Go inside and pull another switch opposite the windows. This moves the hook in the center of the room so you can jump across the pool.

Go out of this room and take a standing jump across to grab onto the hook platform that you just moved. 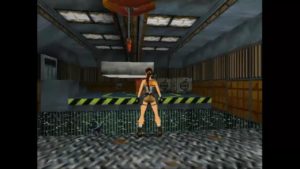 Climb up and take a running jump across to the side with the spinning saw. You won’t be able to turn off the saw yet until you can find the second Machine Chip. For now climb up the blocks to the right of the saw and go behind them into the passage. Push the button here to open a door elsewhere.

Climb up the blocks and jump back over to the other side using the hook platform again. Take the stairs up to the left back into the Square Room. Take out another guard who drops shotgun shells.

Run to the left and take the next door to the left, which is the area with the helicopter. Follow the stairs up to the top, taking out two dobermans and armed guard along the way. The guard drops Uzi clips.

At the top you’ll see the helicopter pad has been removed and there’s now a hole in the floor. Drop down and go through the passage on the other side. Drop down into another room with your guns ready. Another flame thrower guy is here as well as thug with baton. Use your M-16 or other suitable weapon to take them down quickly. The thug drops the second Machine Chip.

Run out the door to the left which opens automatically and go straight past the corridor down to the room with the hook and spinning saw.

Jump across the hook platform and use the Machine Chip on the circuit board next to the saw to turn it off. You can now pick up the Red Pass Card from underneath the blade. 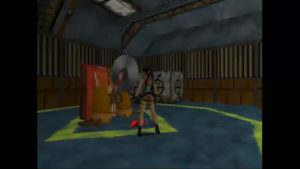 Jump back over the hook platform to the other side and up the stairs on the left. Continue straight forwards to the door with the red lock besides it. Use the Red Pass Card to open the door and drop down. Take out the guard and continue down the passage.

Drop down again and you’ll come to the area with pools where you could only climb up to one block. This time you’re on the walkway around the side of the pools. Pick up a small medi pack and a large medi pack from the guards you killed earlier and a harpoon near the oxygen tanks.

Run through the passage at the end, down a ramp and when you hit the door drop down to the left into the knee-deep water.

Follow the passage around to a room where gunman will start running up the stairs. Take them down as they try to approach.

In the center of this room you’ll see a monk lying down. Don’t approach him just yet! Instead go through the doorway on the left to pick up the Golden Dragon and bonus four sets of Uzi clips.

Now approach the monk to watch a cut-scene and end the level.