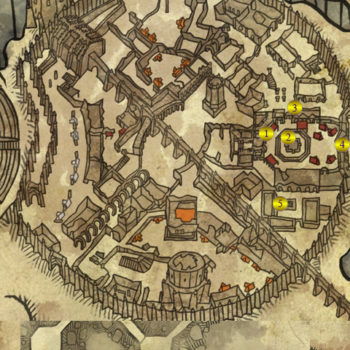 During the quest Lilies and Vipers if you chose to test the authenticity of the Letter you’ll begin The Messenger.

Once you speak to Kimbolt (1) about the forged signature he’ll suggest going to speak to Maravel because they might be involved. Go and see Aldrich (2) first and he’ll take you to #3 where you’ll be attacked by Temerian soldiers. Make your way to #4 for another fight, this time with Nilfgaardian soldiers. Continue on to Hieronymus Lash (5).

Lash is a mage that teleports around the area and casts meteors. He teleports to four locations in the same order every time. When you get close he’ll teleport away. The way to defeat him is to place a trap or Yrden sign on one of his locations. When he teleports onto it and gets stuck you’ll have a chance to swing away at him. Once he’s dead search the corpse to find a letter proving that Maravel is guilty.