Of His Blood and Bone 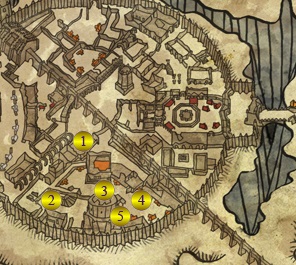 This quest is received during For Temeria! if you decide to rescue Anais rather than going to save Triss in Where is Triss Merigold? You can only choose one path.

Speak with Roche at the Sewer Entrance (1). Take out the Kaedweni soldiers gaurding the entrance and go through the tunnel to the other side (2).

There’s only one way to go so head to the Kaedweni Courtyard (3) and take out the soldiers along the way. Once you get there you’ll have a difficult fight against the Kaedwenis. Once that’s over continue to Dethmold’s Apprentice (4) and face him in battle. He has the usual mage spells, fireballs, shields and teleporting.

Once you kill the apprentice head to where Dethmold (5) is staying in the ruined library. Roche will exact his revenge and kill Dethmold. Loot his body for a Key that opens a nearby cupboard with a Forgotten Vran Sword inside.

Dethmold’s death also causes the barrier separating Anais and you to dissipate. You can either take Anais to Radovid or John Natalis. If you take her to Natalis you’ll be attacked by Radovids soldiers along the way. If you’re playing an imported game where you saved Siegfried then he’ll let you pass without getting into a fight.

Once this quest is completed you’ll receive the next quest, A Summit of Mages.