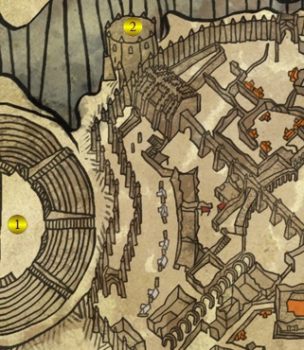 After the peace conference (A Summit of Mages) in the Amphitheatre (1) Sile summons a dragon to protect her. Make your way up the stairs and towards the nearby Tower (2).

As you make your way up the tower part of the stairway will collapse. The dragon will also try to attack but shouldn’t do much damage unless you stop. Sile will give you some more information about the assassinations and tell you that Nilfgaard is marching to war against the North.

During the talk one of the diamonds in Sile’s megascope will play up. If you remove it Sile will stay alive, if not the megascope will explode, taking Sile with it. If you decide to save Sile she’ll tell you that Yennefer is in Nilfgaard before teleporting away.

The dragon has a melee attack and also breathes fire. To get close to it use Quen to shield yourself and approach when it’s breathing fire. Attack with whatever skills you’ve developed up until now until the dragon gets to about half health. At that point it will fly away, destroying part of the tower as it goes.

Climb to the rooftop of the tower and get ready for round two. This time when the dragon starts to fly you’ll need to take cover by the sides of the tower. Dodge away from its melee attacks and quickly run up to it once it’s breathed fire for a quick attack. Roll away again and repeat the process.

Once the dragon has taken enough damage you’ll start QTEs. Follow the prompts as Geralt jumps on the dragons back as it flys through the forest. The fight will end as the dragon impales itself on a tree.

If you have the Dagger you can use it now to cure Saskia, otherwise you’ll have the choice to slay the dragon or just to walk away. Either way this ends Chapter 3 and you’ll move on to the short Epilogue.