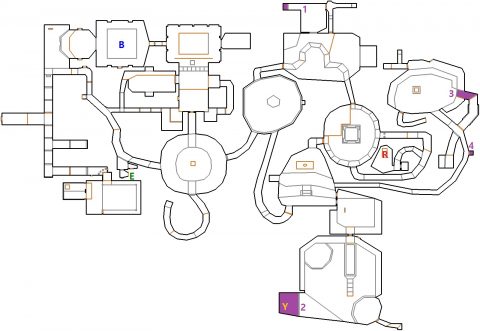 From the Start head along the passage to the circular room with 4 exits. Three on the top level and one below. Drop down and take the lower exit to the north.

Take out the Shotgun Guys to the left. When you enter the small room a wall opens behind with more gunners. This process repeats a few times until all the walls and passages have opened up.

They grey wall ahead opens up automatically when you get close to it. You can clear out this area now or later when we come back around to it.

Go through the tunnel on the west side with the Backpack and take the lift up. Press the face Button on the wall to the right and run back around to the left so you can make it over the lift before it comes back up. Grab the Blue Armor and enter the dark room.

Take out the enemies and stand on the ledge at the back with the Health Potions. This is a lift that will take you down to the previous room. new sections will have opened up with an Arachnotron and Specters.

Press on the Face Button to lower down the pillar with the teleporter in the starting room and dash towards it. 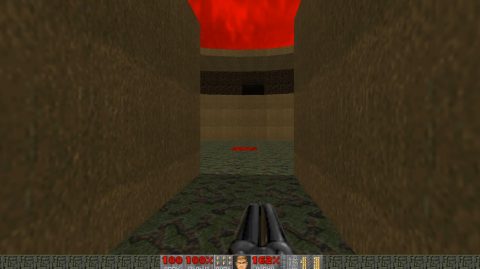 Open the door and you’ll see a yellow path ahead. Watch out for the Mancubus on a ledge to the left and an Aarachnotron that is revealed in the wall to the left. There’s also two Arachnotrons in a cage in the back wall. 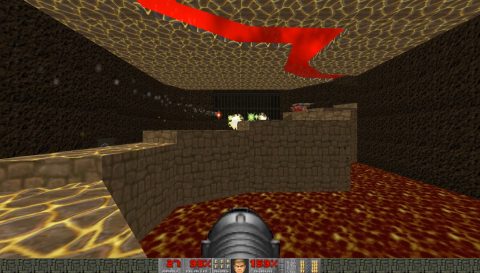 Drop down into the lava on the left (north) side and open the door. Take out the Chaingunner to the right and go through the fake wall to the left to the room with the Arachnotron. Open the wall to the east for Secret 1 with an Energy Cell Pack.

Head back top the lava and get on the yellow path at the entrance to the room. Follow it to the other side and open the door.

Clear out the gunners and then go through the passage to the east half way down the stairs. Red bars will lift up behind you so there’s no way back.

Follow the passage to the right and at the end go through the fake wall opposite the grey door. Inside you’ll find the Red Key. 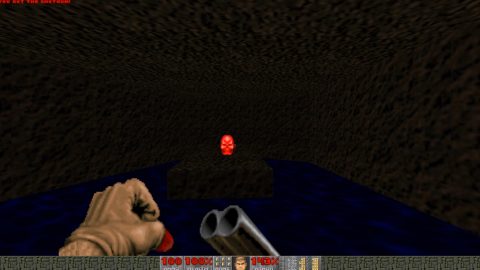 When you enter the door behind you will open releasing a Revenant and Shotgun Guy. Take them out and head back up the stairs.

Continue along the corridor to the right and you’ll come back out to the previous room although the center will be open. Take out the 2 Cacodemons and Revenant and open the door at the bottom of the stairs.

The next room will have a Pain Elemental, Cacodemons and other enemies. Use the BFG to clear the room quickly. The pillar lowers down when you get close to it and has a teleporter on the top. Step on it to be teleported across the lava river to the other side of the room.

For the Yellow Key first go through the door to the east. Clear out the enemies, lower the rock bridge and press the Skull Button to open the door so you can get to the next room to the south. This room is difficult to navigate because of the pools of lava. 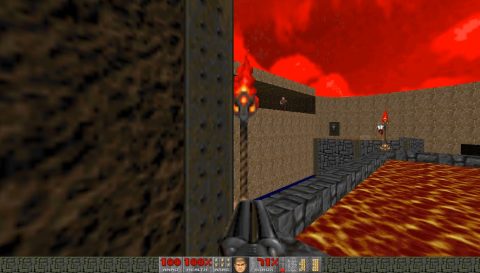 Drop down to the water, take out the enemies and then walk halfway up the stairs. A room will open behind you with a Pain Elemental and Cacodemons. Take them out and then pick up the Yellow Key. This is also Secret 2.

Head up the stairs to the rectangular lava pool and ride the lift up to the walkway. Around one side you’ll find a Soul Sphere.

Drop down into the circular lava pool on the south side and go through the Yellow Door. When you step forwards you’ll be teleported to an earlier room with the lava river in the middle. 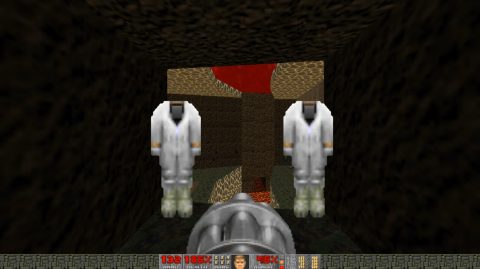 Grab a Radiation Suit and drop down to the lava below. Follow the passage along to a room on the other side. There’s another Radiation Suit here if you need it.

Open the door to the south and push the Button at the end of the passage. This lowers down the teleporter in the center of the lava. Quickly step onto the teleporter to be taken up to the walkway above. Press the Button up here to open up another room with the Invisibility. When you step forwards to grab ti you’ll be teleported to the central pillar but other secrets will have opened up. Drop down and grab the Megasphere. This is Secret 3. 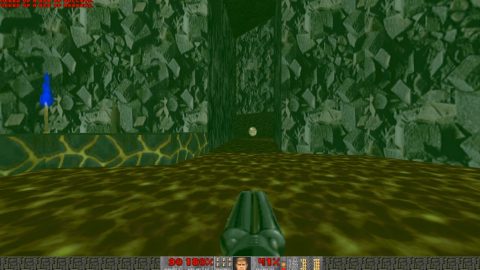 Open the door back to the previous tunnel and step on the teleporter to the left. This is Secret 4 and takes you to the Invisibility sphere that you couldn’t grab earlier.

Make your way back to the starting room and take the passage to the east all the way to the Red Bars. Open them and go through.

Press the Button to lower the lift and ride it up to the room above. Kill the Lost Souls and Imps and then press the Switch to open the wall with the Barons of Hell.

Press the Switch to ride the lift down slowly. At the bottom you’ll have to face a few Mancubus guarding the Blue Key. 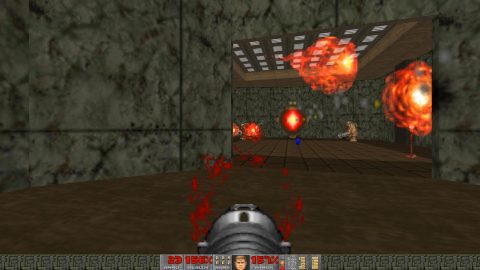 Grab the key and open the Red Bars if you want to clear out a previous room. When you’re done ride the lift back up and head down the corridor to the south.

About half-way down you’ll drop down a lift with an Arch Vile. Use the BFG to take him out and press the Switch to lower the lift so you can ride it back up.

Continue down the corridor and take out the Baron of Hell down each side passage.

Use the Blue Button to remove the bars and take the lift down to a room with a large cage in the middle. Use the BFG to clear out the Barons of Hell.

Press the Button under the Exit sign but you get close you’ll drop down a lift. Clear the room with the BFG and press the Button to reveal a teleporter. Go through to be teleported next to the exit. Kill the Chaingunner and hit the Exit Button to complete the level.